All hail the all new Mazda Mx-5… 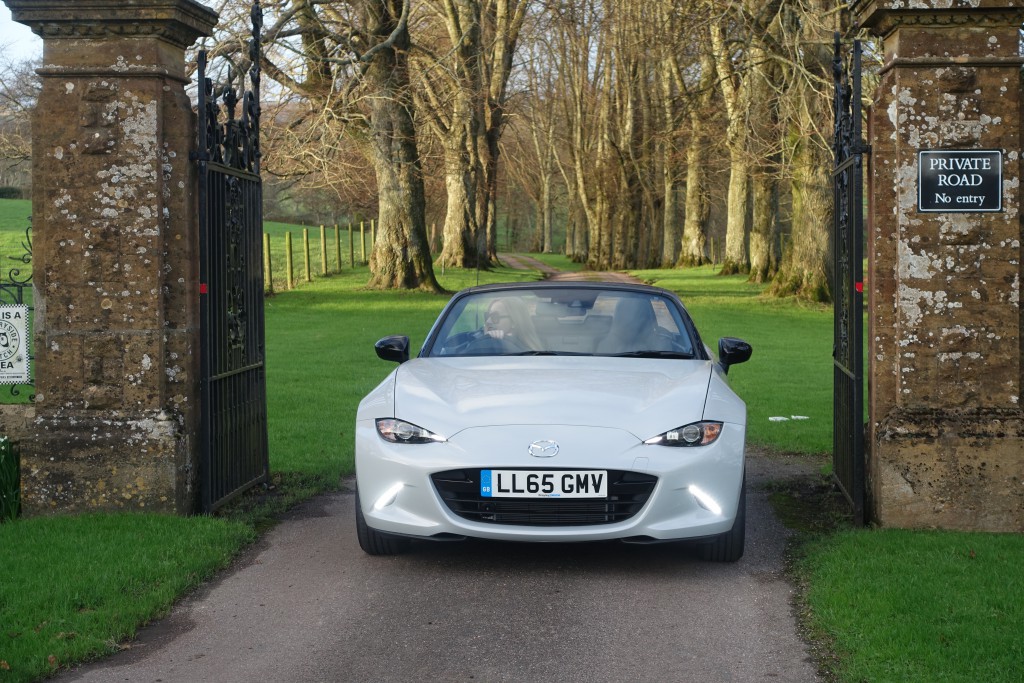 Long awaited, I bought the car just after it came out in September, not realising quite how popular it would be and was told it wouldn’t be arriving until January! Luckily, I had fate on my side and my beautiful new Mx-5 arrived no other day than Christmas Eve itself. Christmas miracle or what!? Thanks Santa.

Anyway, I’ve got the all new Mazda Mx-5 Sport Nav in Ceramic White and it’s a game changer for me. As a lifestyle blogger, I’m constantly on the move, whether it’s travelling cross country or scouting locations for a fashion shoot, so it’s the perfect riding companion for a road trip. Not only does it look and feel like a dream, but it also holds my coffee for me during journeys, keeps me warm with the heated seats and cool with the roof down, listens to my questions and gives me answers in return with voice activation, plays my favourite music through the Bose sound system and most importantly, is really fun to drive, all while doing it safely and seriously in style. What more could you want? 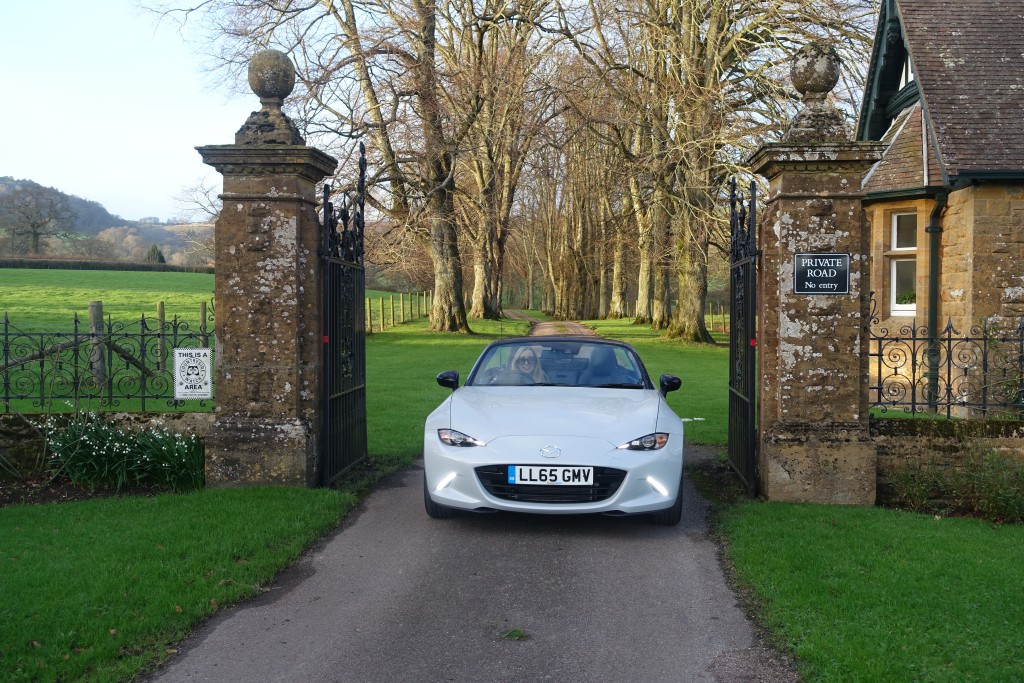 There’s about 7 different colours you can choose from and 3 of them are different whites. As mentioned above, I went for the ‘Ceramic Metallic’ which is the most beautiful white I’ve ever seen. It almost changes colour by the weather and its surroundings. In sunlight it looks a dazzling pearlescent white, on grey days it looks more of a silver white and as it gets dark/on stormy days it has a blue tinge to it. When I looked at it online I didn’t like the colour, but don’t be fooled by the website as it literally looks nothing like it does online – I’d definitely recommend seeing it in the flesh because, as soon as I did, it blew all other colours out of the water.

What’s more, I love gadgets and the all new Mazda Mx-5 certainly doesn’t disappoint, from those mentioned above to Bose speakers in your head rest so you can hear your music/the phone when you’ve got the roof down, heated seats and strategically placed cup holders for the driver! I also chose the Sport over the SE/SE-L (standard model) because it had all the added features mentioned in this post as well as leather seats and black alloys which look amazing with the black wing mirrors and roof – it gives it that monochrome look everyone is coveting right now! 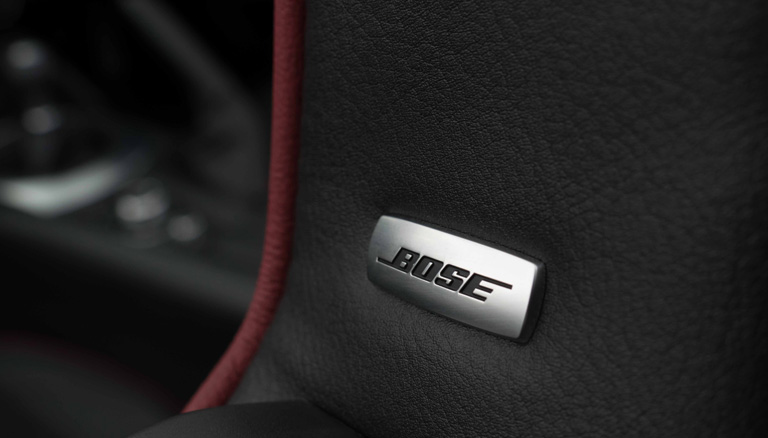 I’m not the only one who is in love with the all new Mazda Mx-5 as it’s already won 4 awards in the short space of time it’s been released: The Sunday Times Top 100 Cars Winner for 2016, Auto Express New Car Awards Winner 2015, Reddot design award best of the best 2015 and Car of the year in Japan for 2015-2016. Plus, it’s been nominated as one of the 7 finalists for the 2016 European Car of the year! The winner is announced in February. Meanwhile, Top Gear has rated it 9/10 and said it’s “the same as it’s always been. Just, better than it’s ever been before” and has been noted to be very competitive against the BMW Z4 as well as some other sports car models. 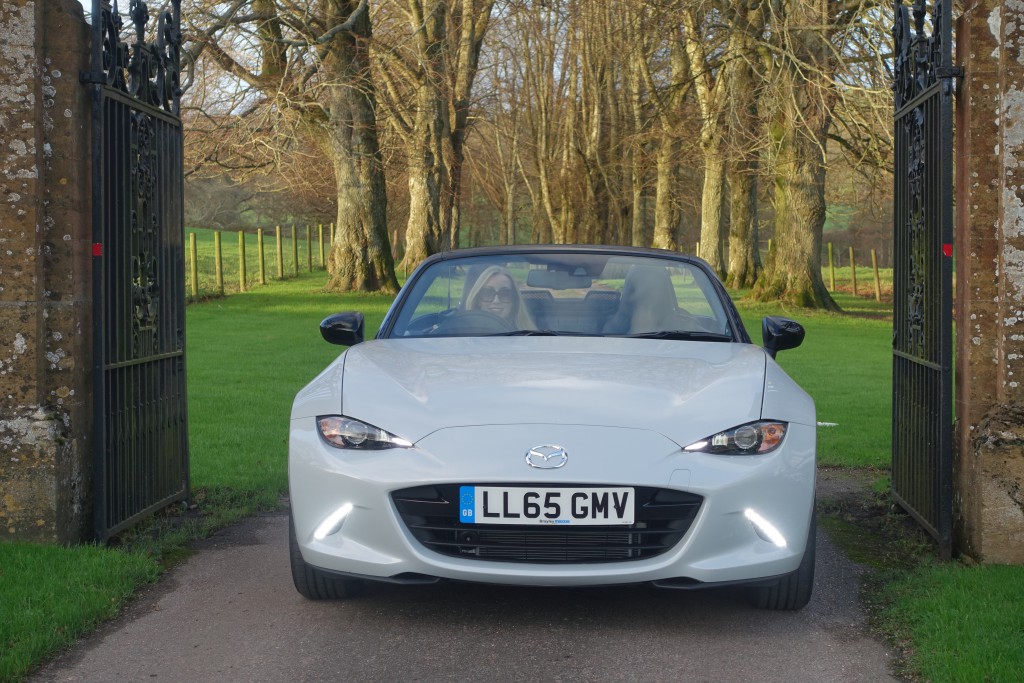 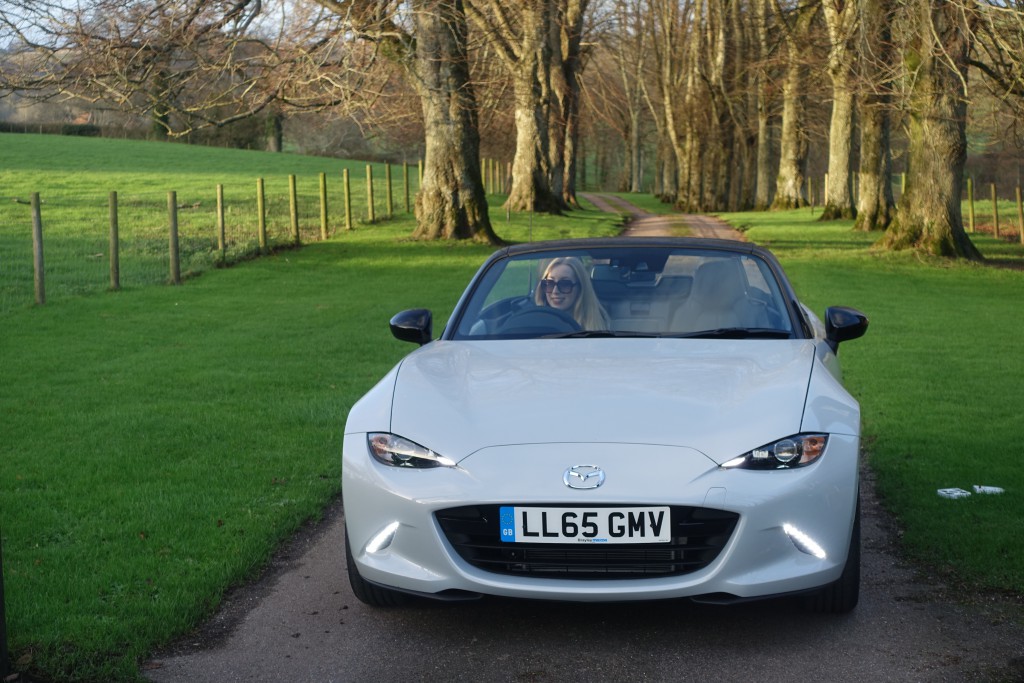 There are 4 key components of the all new Mazda Mx-5:

1) KODO design: It has an edgy look, with dynamic lines which flow from tip to end giving it a sense of motion and power, but its solid stance from being very low on the ground suggests its road-holding agility, which is second to none. The colour of the car sweeps into the inside of the doors making it seamlessly stylish. 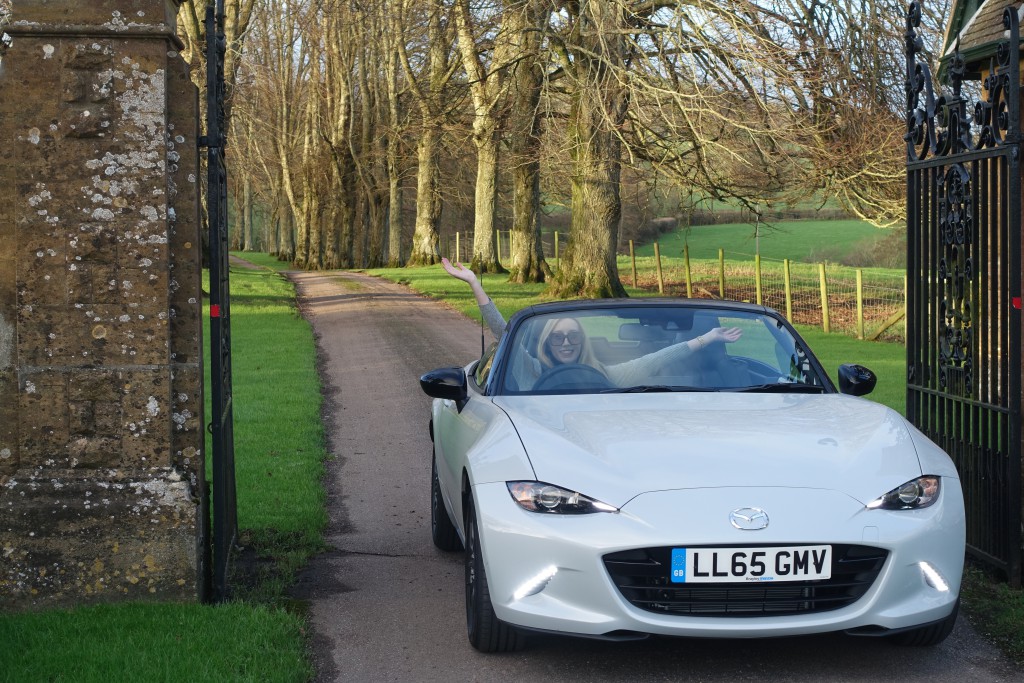 2) SKYACTIV technology: this ensures you can enjoy the exhilaration of those twists and turns without compromising your fuel economy. Mazda has optimised engines and transmissions for the rear wheel drive and it is much lighter and stronger bodied than its predecessors. It’s the most compact MX-5 of any generation, and by moving the engine closer to the vehicle’s centre, the car has achieved the ideal 50:50 weight distribution. It does an average of 47.1mpg and I filled my tank up fully for £35 which beats my previous golf, which was easily £50 to fill up. 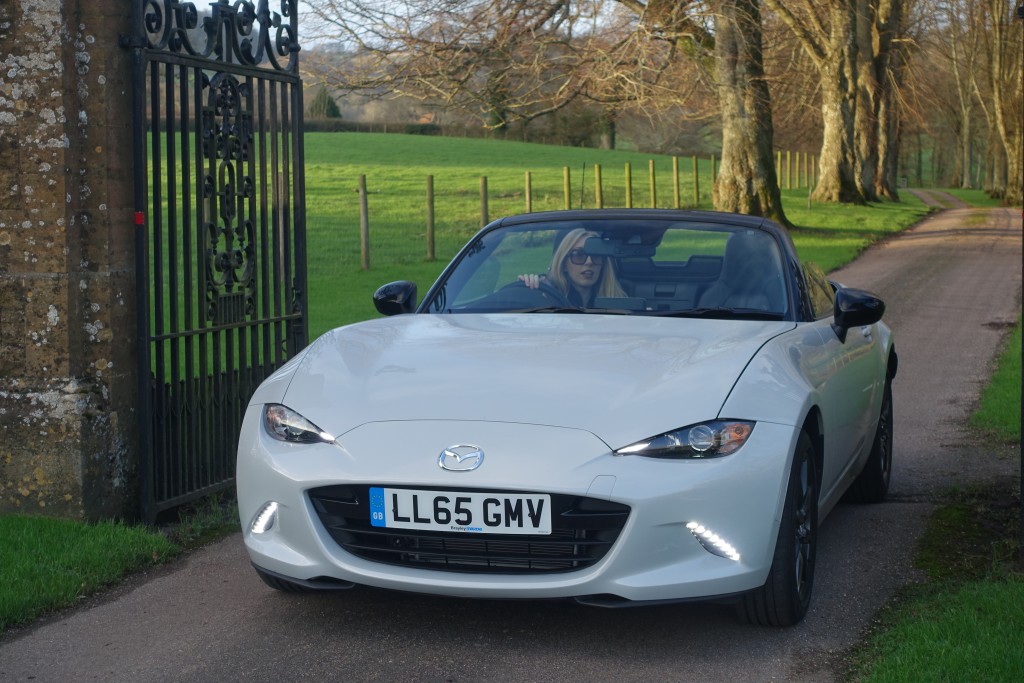 3) MZD connect: With the touch screen you can access your contacts and texts, play music using bluetooth on your phone and there’s even a multimedia commander you can press on your wheel which will tell you pretty much anything you ask it to, whether it’s where you are on the map, if you want to play a specific song or if you want to call someone. Not bad eh!? 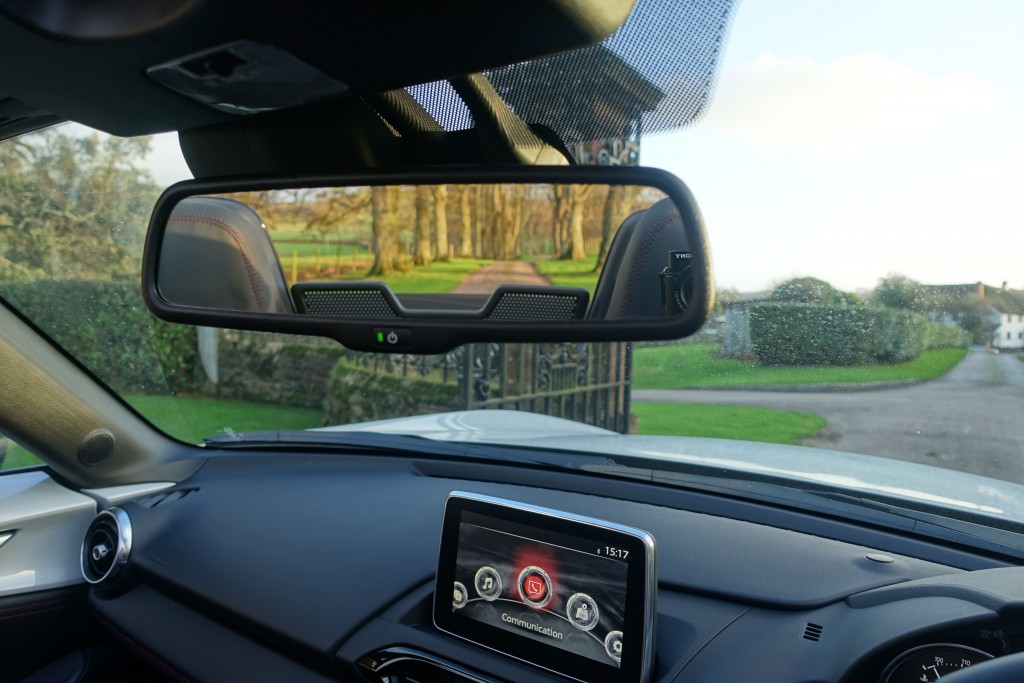 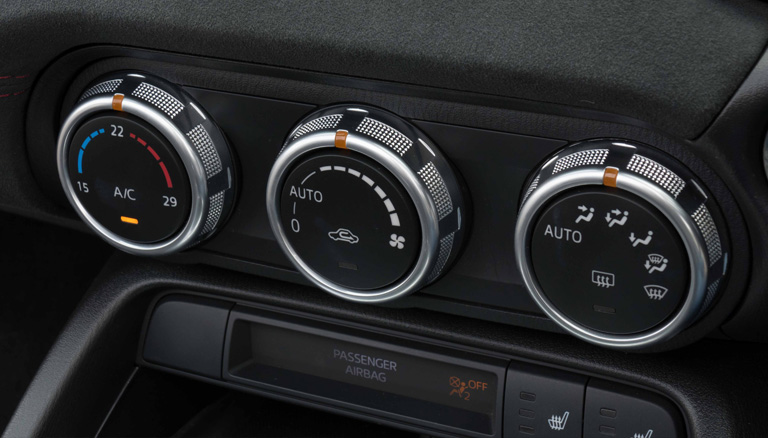 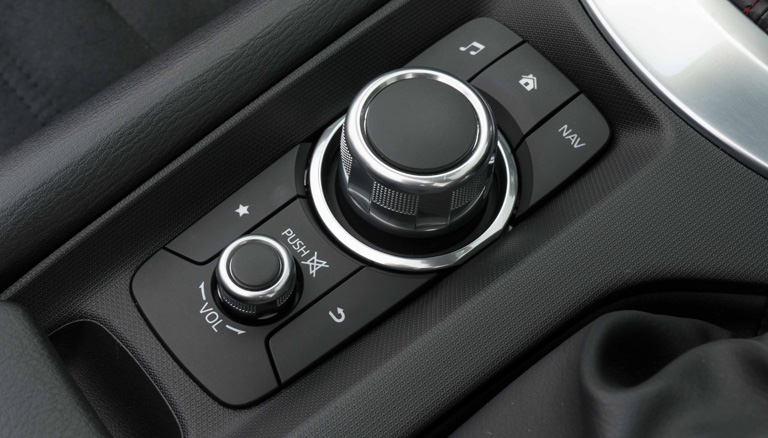 4) Advanced safety technology: It has innovative advanced safety features, such as Blind Spot Monitoring that beeps if you’re too close to a car when changing lanes or vice versa and a High Beam Control which darkens lights of those behind you and also turns yours on automatically when it’s dark enough and off when approaching oncoming traffic. 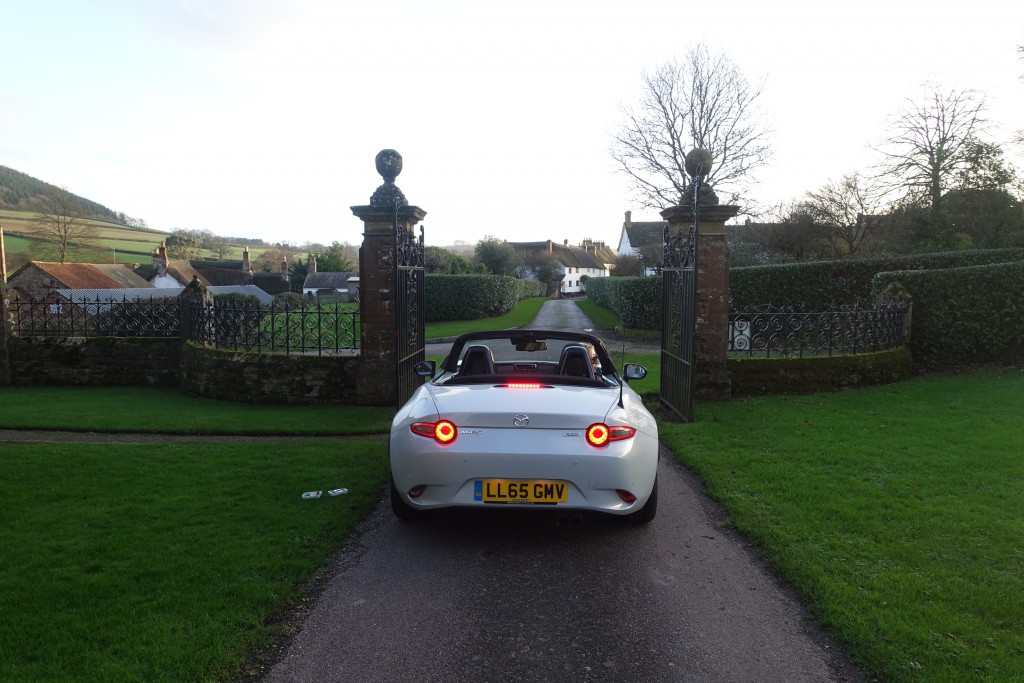 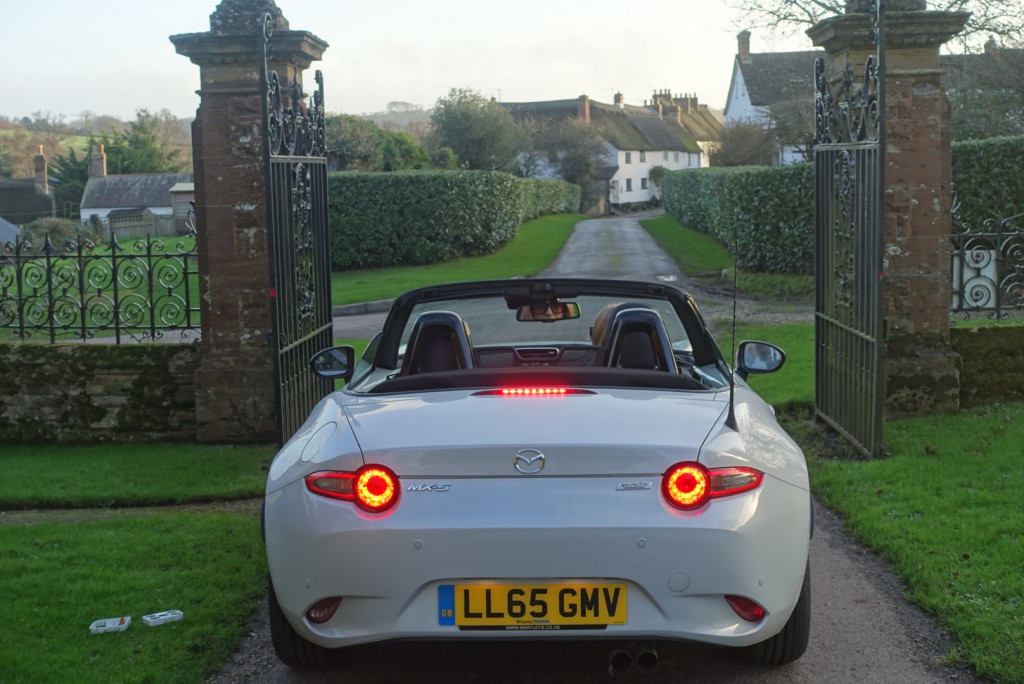 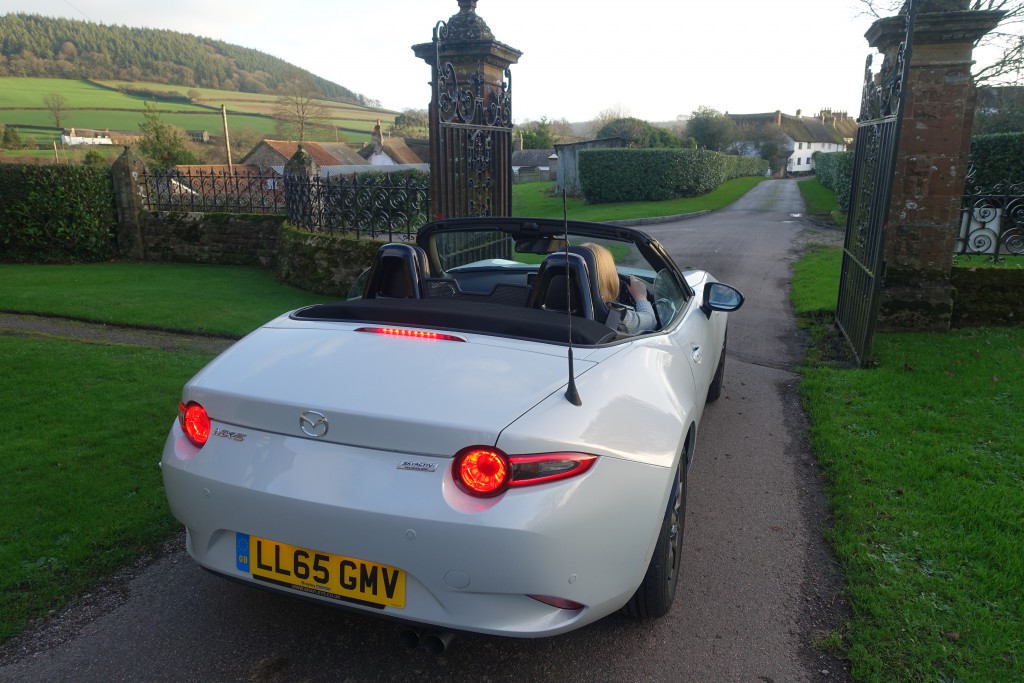 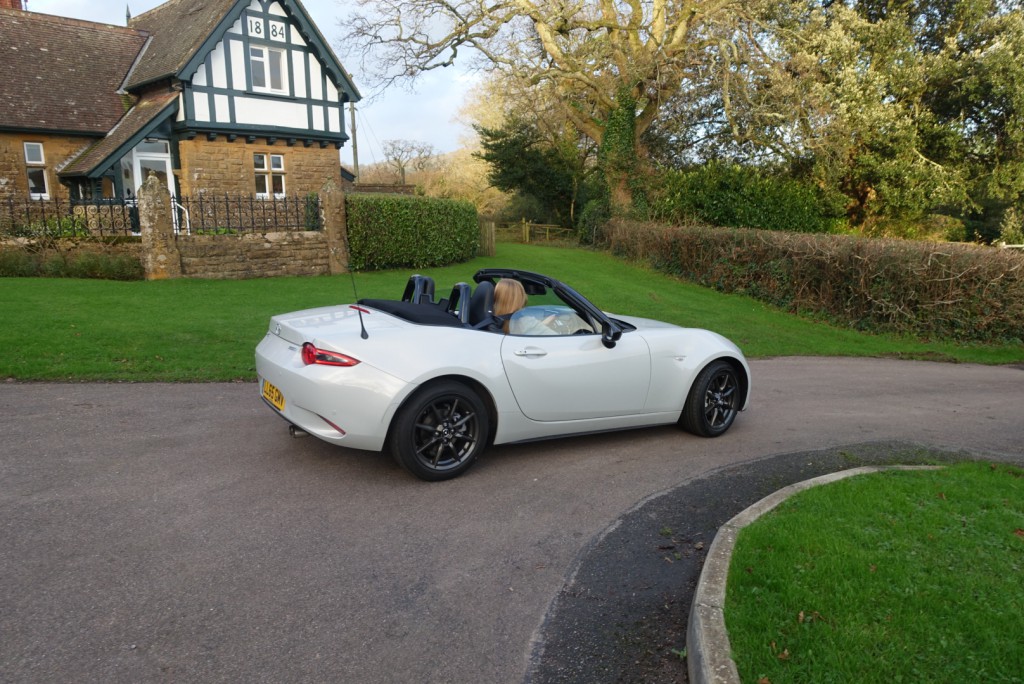 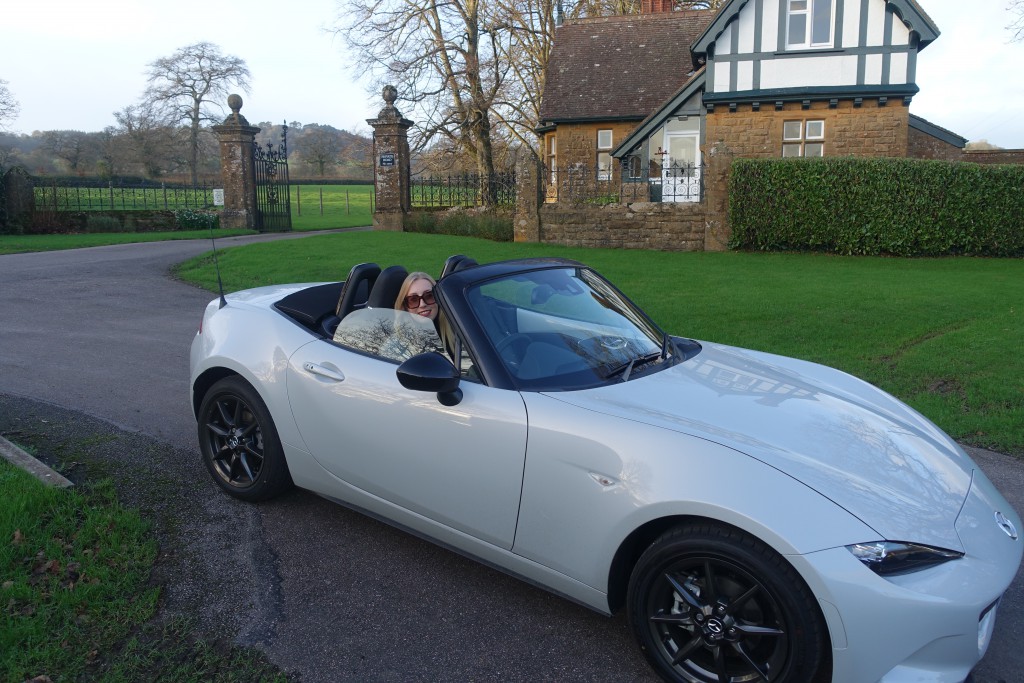 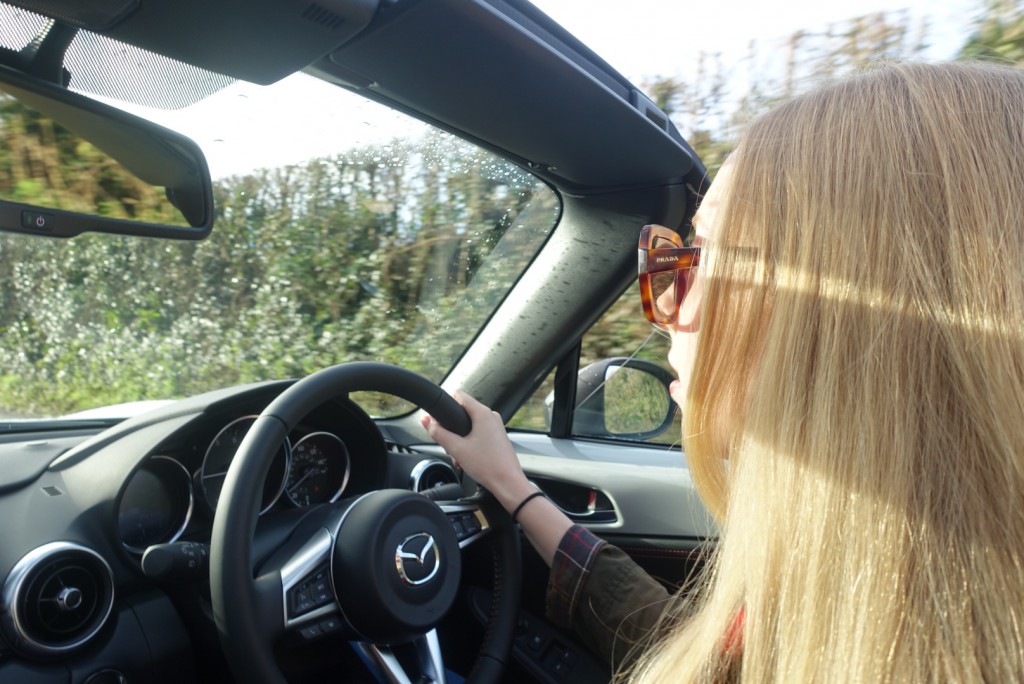 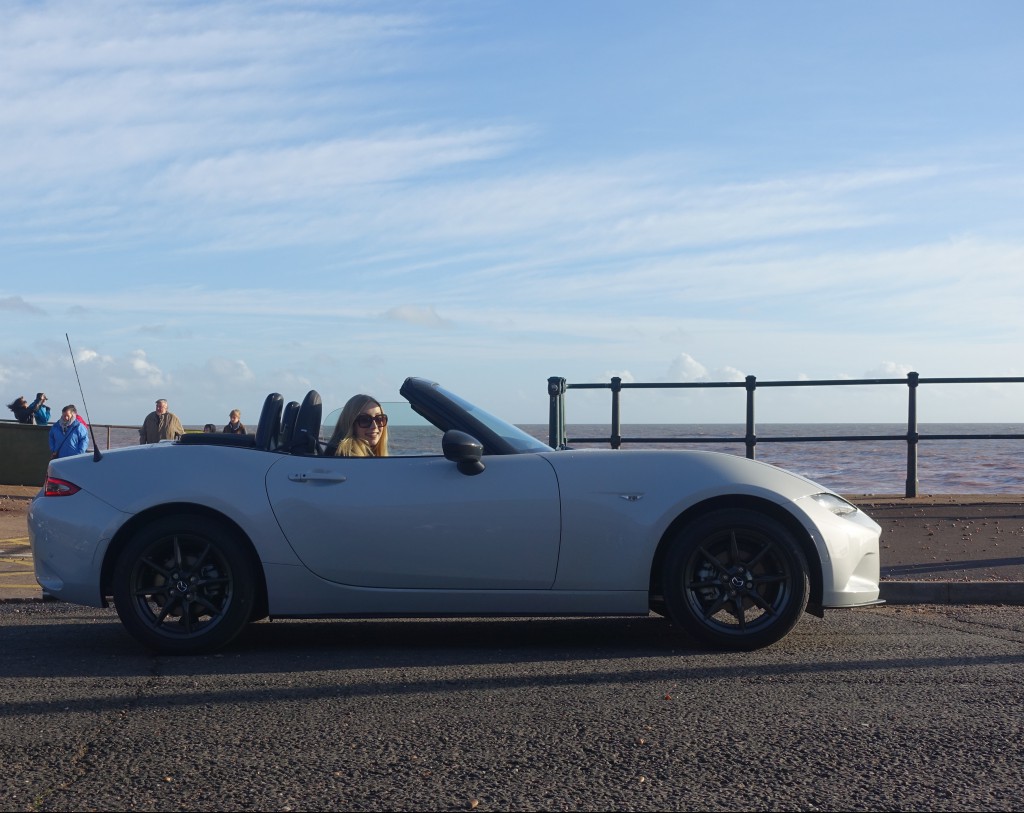 So, all in all, I couldn’t be happier with my purchase and rate it 10/10 for style and performance. 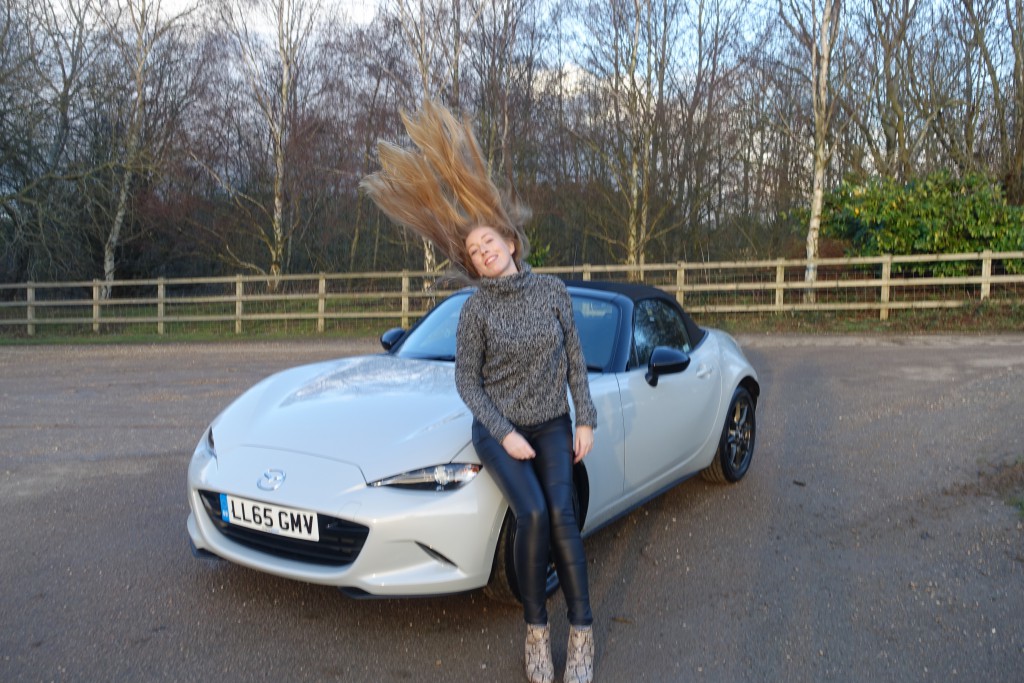