Few restaurants can master the longevity of London like Le Gavroche. 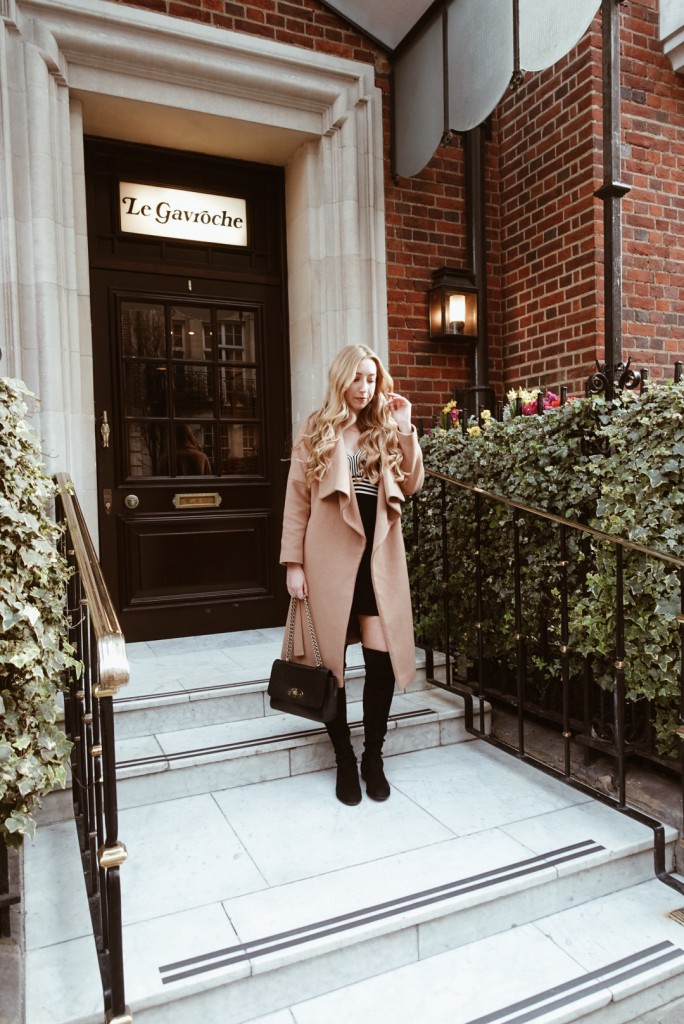 In 1967 Le Gavroche opened its doors to Lower Sloane Street, before moving to Upper Brook Street in 1981, where it earnt another michelin star a year later. Le Gavroche was the first UK restaurant to be awarded one, two and three Michelin stars. The chef de cuisine is Michel Roux Jr, who took over the reins from his father, Albert in 1991. 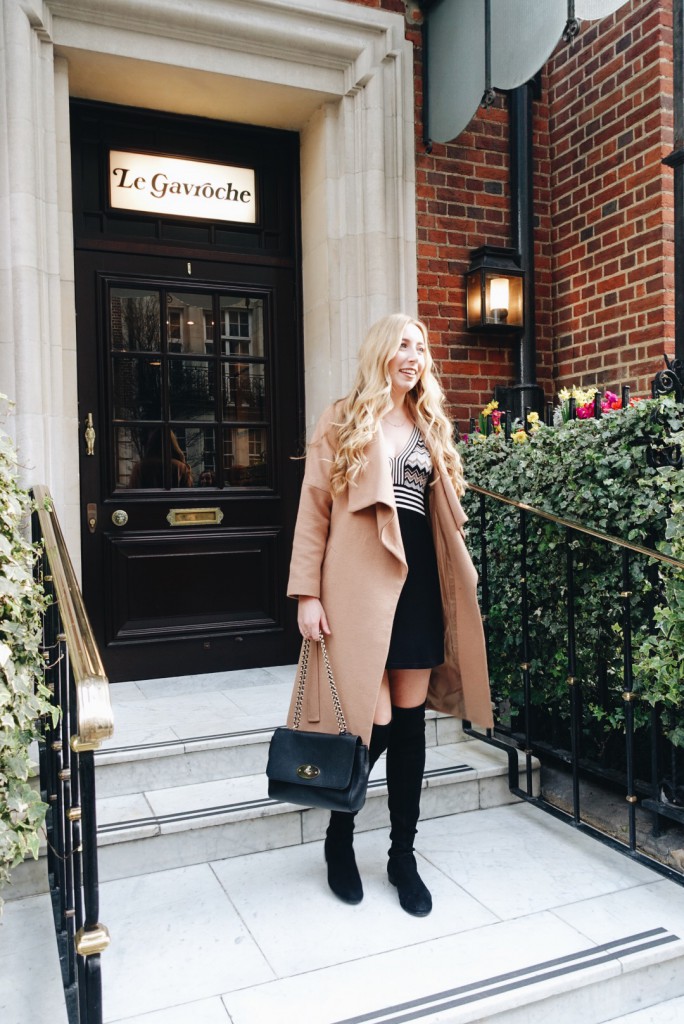 The original Gavroche, was a character from Les Miserables: also known as the revolutionary Urchin. A painting of the character was presented to the restaurant on its opening night, which gave the restaurant its identity. Now, its menus down to its cutlery has the gavroche figure carved into it. Perhaps it also had something to do with the fact the restaurant revolutionised fine dining in London? 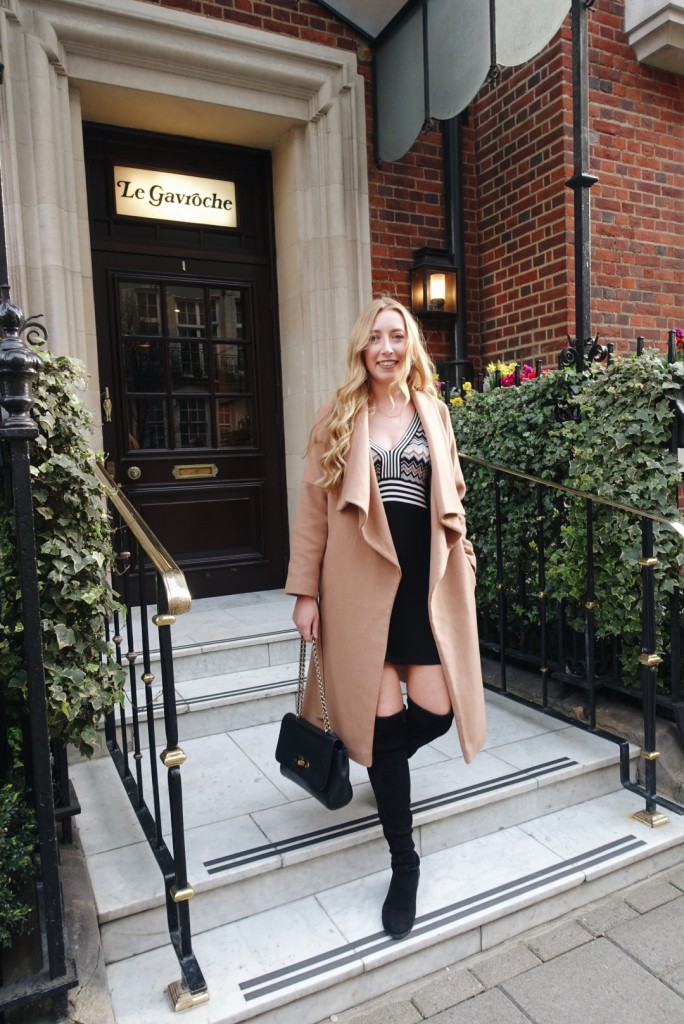 We arrived on Upper Brook Street after an easy saunter past Park Lane and arrived by a beautiful building with shrubbery dressing the gated steps to a demure yet significant doorway. The door handle itself had the gavroche character made of brass which marked the intricacy of which the restaurant prides itself on.

We rang the doorbell and were swiflty greeted by a warm and welcoming french lady who took our coats and guided us through to the parlour for an aperitif. The surroundings, rich and luxurious, I felt as thought I had been transported into the french countryside, with authentic artwork lining the walls and deep burgundy chairs. We ordered some champagne and toasted to our mixed celebration of birthdays, anniversaries and an engagement… in case you were wondering, yes, it was my engagement… to the man Michel himself. Kidding. It was my sisters. But could you imagine the catering at the wedding? … Anyway… 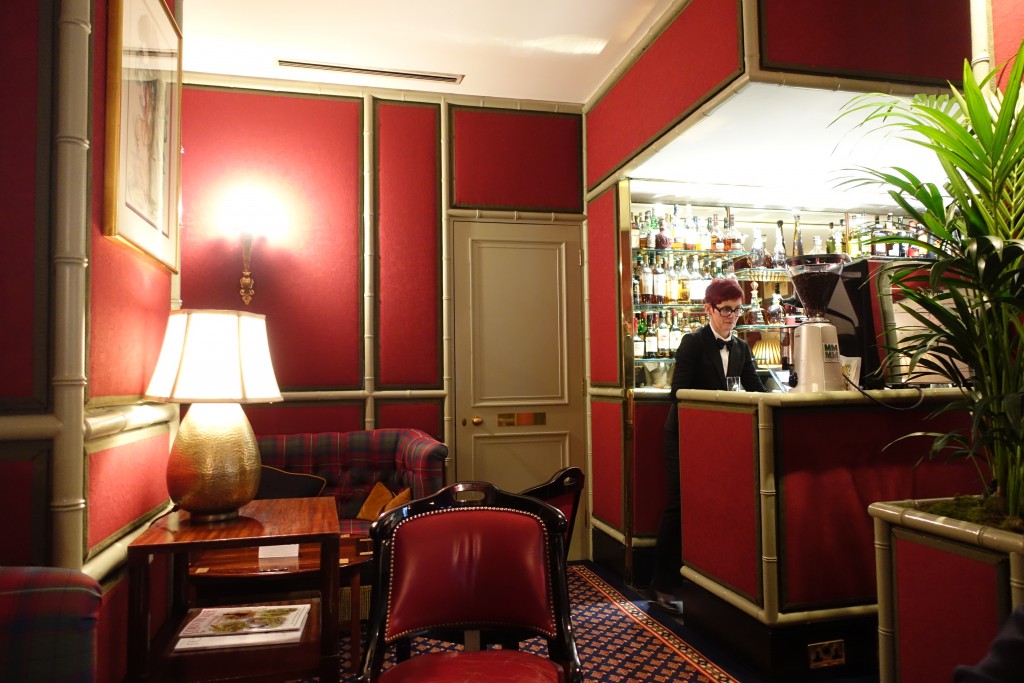 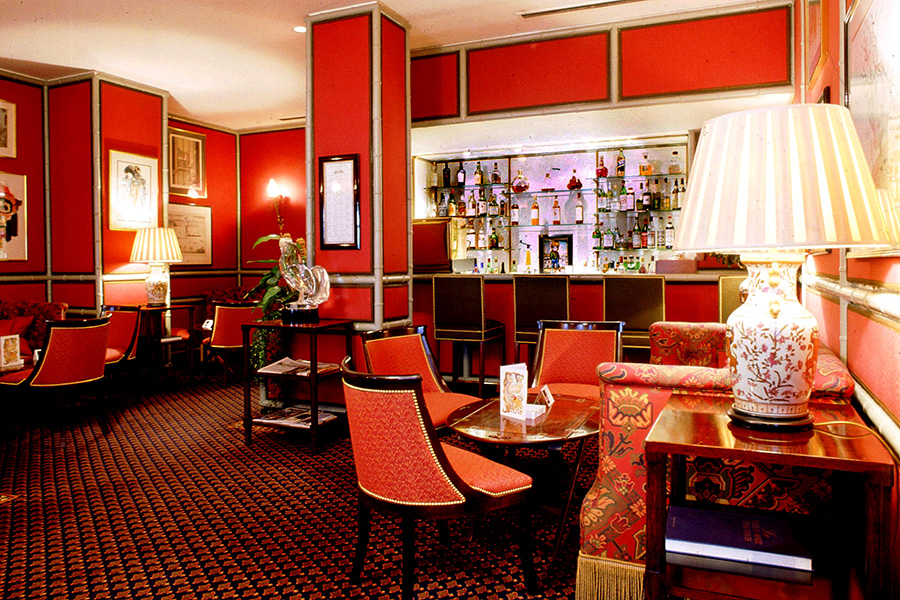 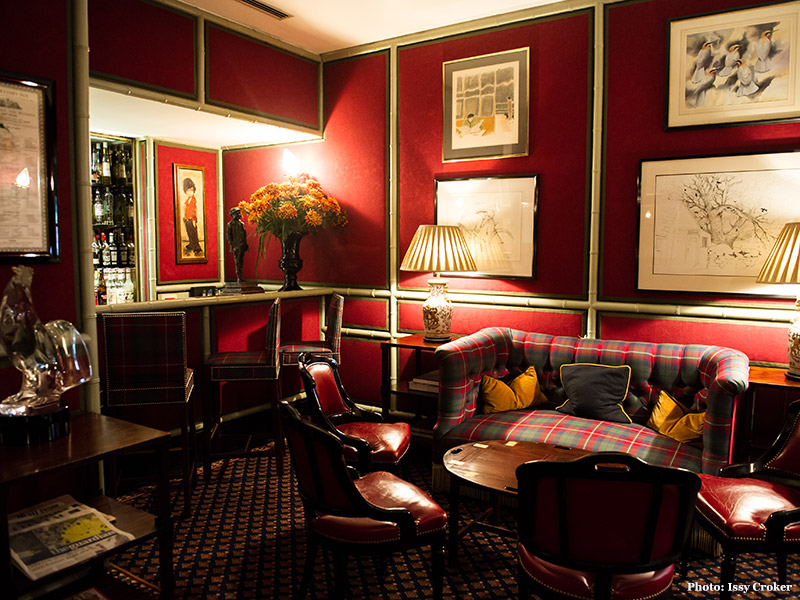 After our bubbly beginning, we were escorted down two flights of stairs to where the real magic happens. Rich royal bold bottle greens, it was love at first sight with my surroundings and I knew it would be a long-lasting french affair. 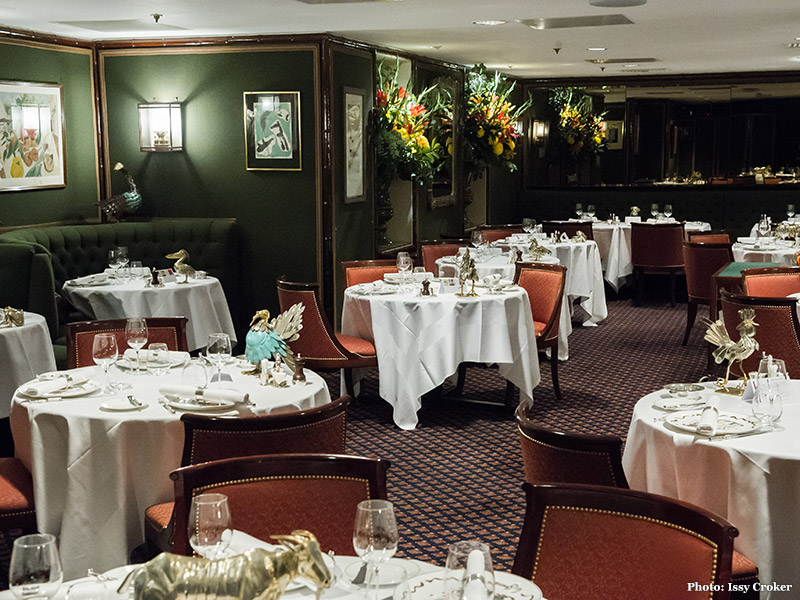 We chose the sample set menu so we could try a bit of everything… mainly because we’re all a little greedy also and we didn’t want to get FOMO (fear of missing out) from people’s choice of dish.

The first of nine courses arrived and we weren’t disappointed.

A cheese souffle cooked on double cream lay there coyly, enticing us to devour it. Which we did. In a matter of seconds. Warm, juicy succulent but light, it was the perfect combination. With this we paired a 2013 Domaine Ferret Pouilly Fuisse which was a white burgundy wine. It had a good balance stone fruits, honeysuckle and quince which goes very well with what we were eating and there was a slight creaminess balanced by a clean minerality which complemented the souffle. 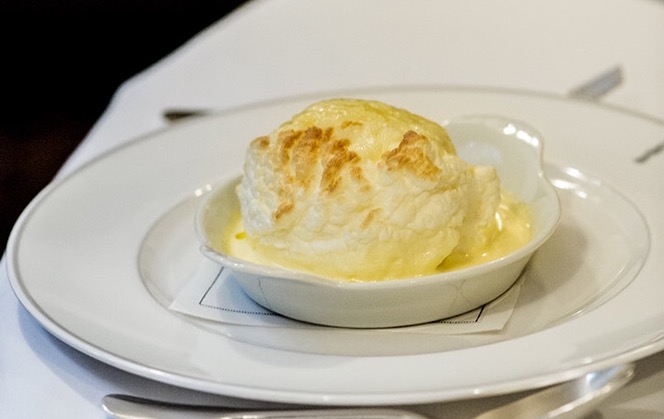 The next dish was a carpaccio of marinated venison fillet, horseradish, pickled beets and rye bread toast. Equally delicious, everything was so tender and a good mix of spice and sweet. Sorry for the blurry picture below, my mouth was watering so much I wanted to get on with gobbling it all up! 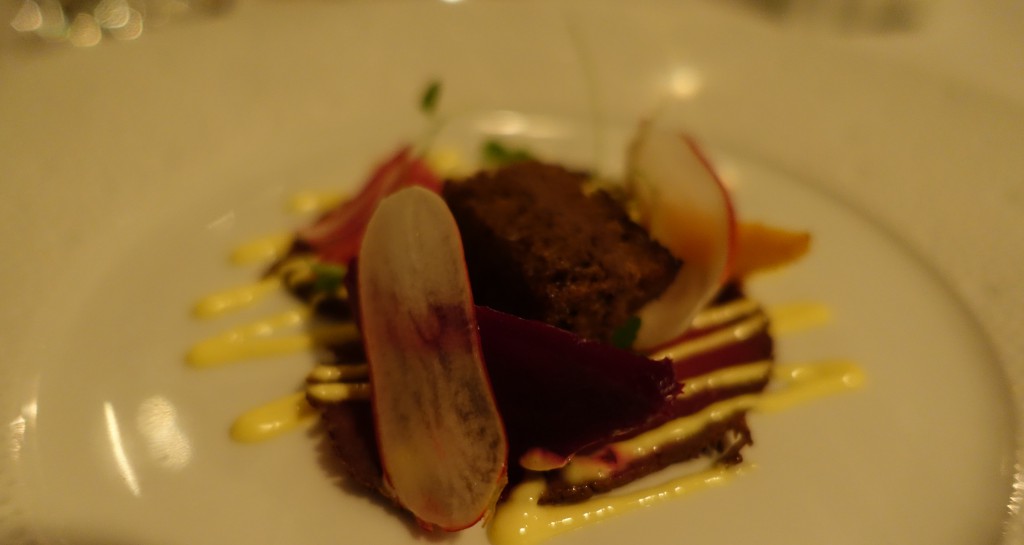 Following the fillet was one of my favourite dishes, the grilled scallops with a coral crumb, carrot and chartreuse liqeur veloute. It’s very easy to over or under cook scallops but Le Gavroche wouldn’t let you think so… It made me go into a seafood siesta. 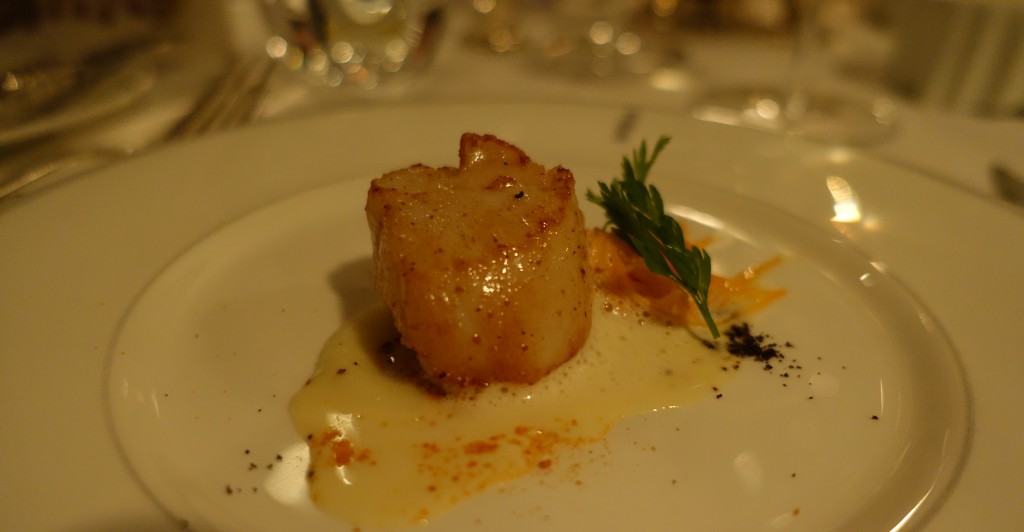 The stone bass fillet followed, dusted with arabian spice, on a bed of red camargue rice, fennel coulis and aubergine. This was seasoned to the point of perfection and I should make you aware not yet, was there a scrap left on the plate. 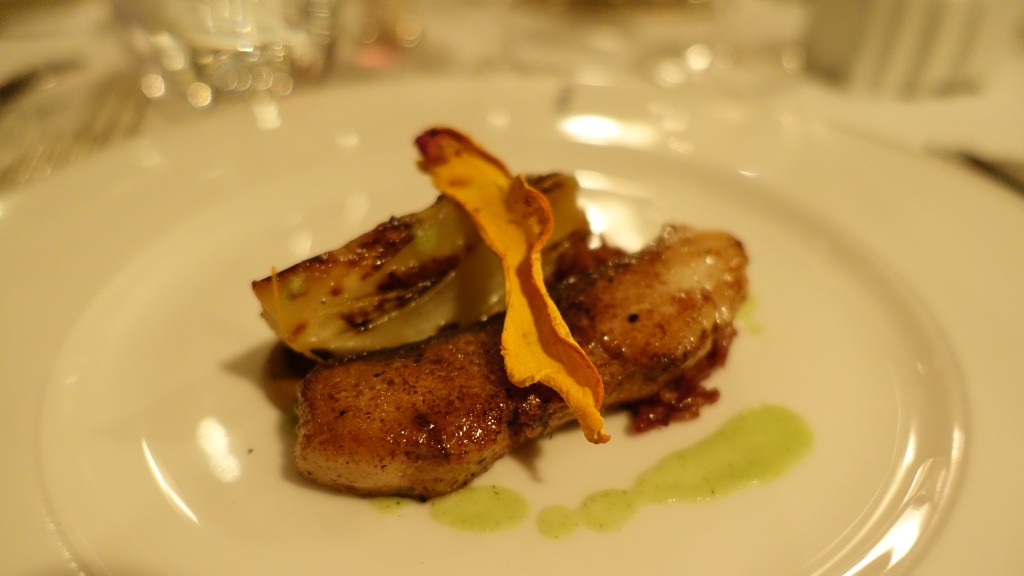 The black pudding arrived with a poached egg, crispy mushroom ravioli and red cabbage condiment, which all complemented each other very nicely, especially with the different textures and layers of crisp and melt in your mouth. We also moved onto a red wine to match our dishes. We chose the red burgundy pinot noir 2006 Sylvain Cathiard Nuits St. Georges Les Murgers which was an elegant wine of moderate complexity matching the differences in our dishes. It encompassed berry notes and was beautifully scented. A very easy smooth and pure drink that went perfectly. 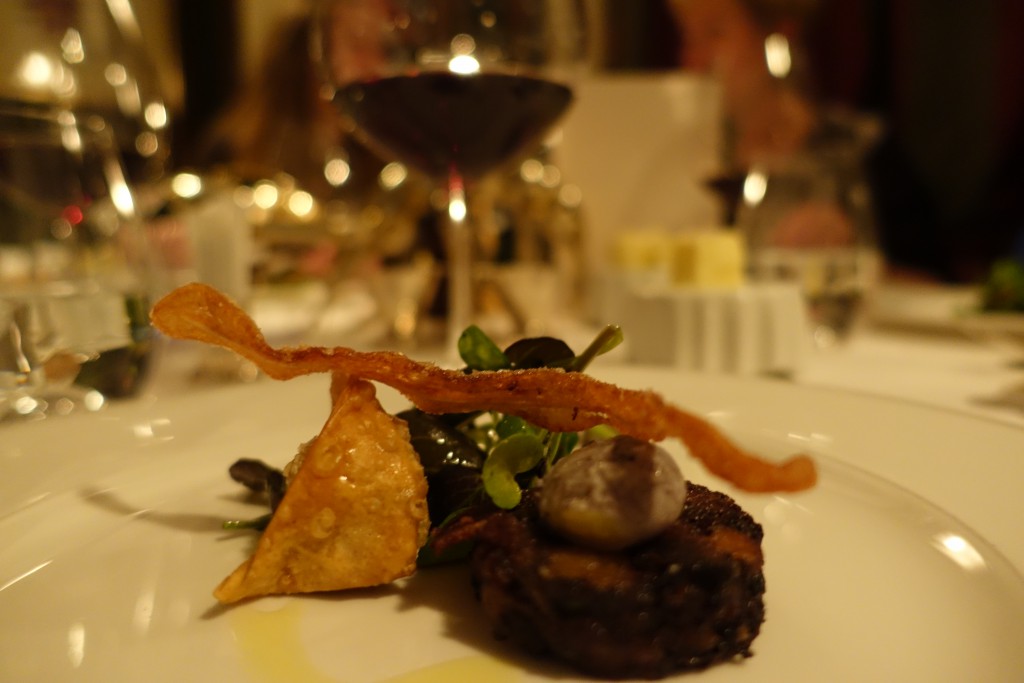 At this point, I needed to powder my nose and stood up, only to be immediately escorted through to the Ladies bathroom. And my, oh my. A selfie had to be taken. This was one of the most gorgeous bathrooms I’ve ever been to. Brushed faded french doors, chaise longue, marble tops and hand mirrors lining the walls, it was every girls dream. 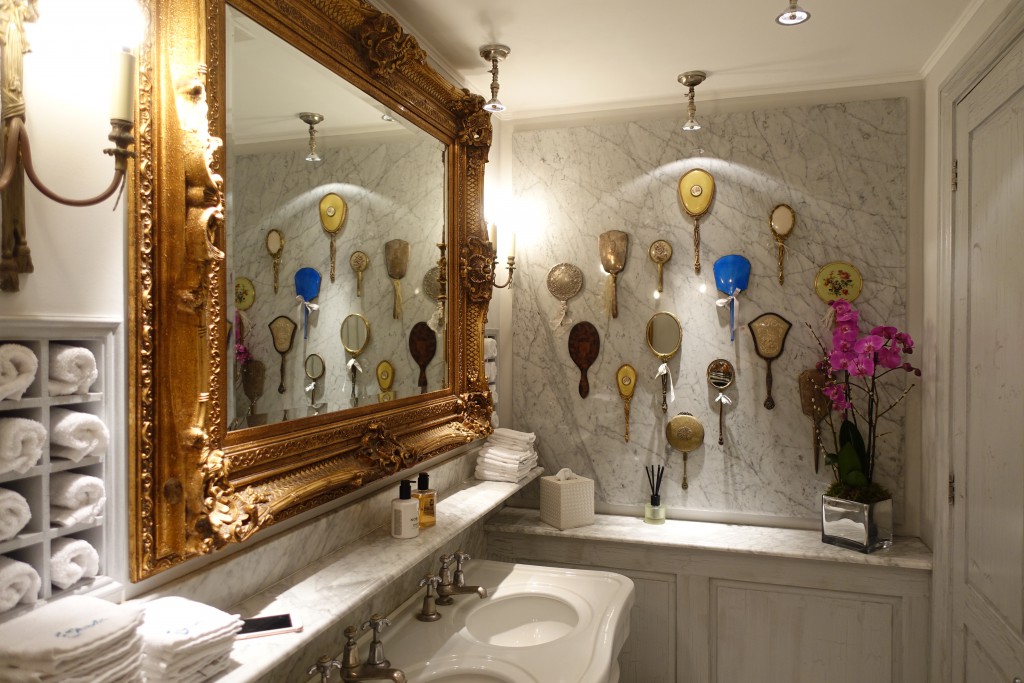 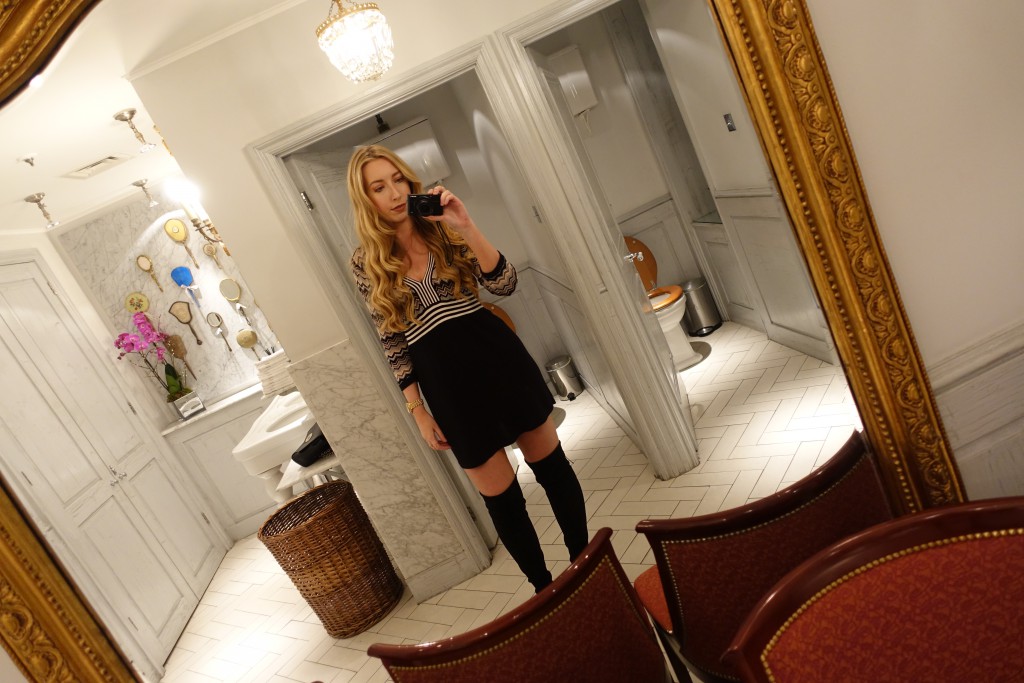 By the time I got back to my seat I half expected the next course to be there waiting. Silly me. A few minutes after I returned a group of 5 waiters graced our tables with 5 silver domed platters. Ever so silently, they muttered 3 – 2 – 1 and like a theatrical performance, unveiled with vigour, our Joue de Boeuf Braisee au Vin Rouge, Puree de Panais et Lardons was presented. Okay sorry, I’m showing off my French, but it just sounds so much more dramatic than red wine braised beef cheek with parsnips, bacon and chantenay carrots. Nevertheless, it was absolutely divine. By far the best dish of the evening. The beef literally melted in your mouth. At this point, Michel Roux Jr himself, came over to our table to ask us how our meal was going… He was very humble and very personable. Plus, he makes a mean souffle. I was really impressed that he took the time to come to people’s tables to see if they were enjoying everything and it just reiterates the special quality and the intimateness of Le Gavroche. 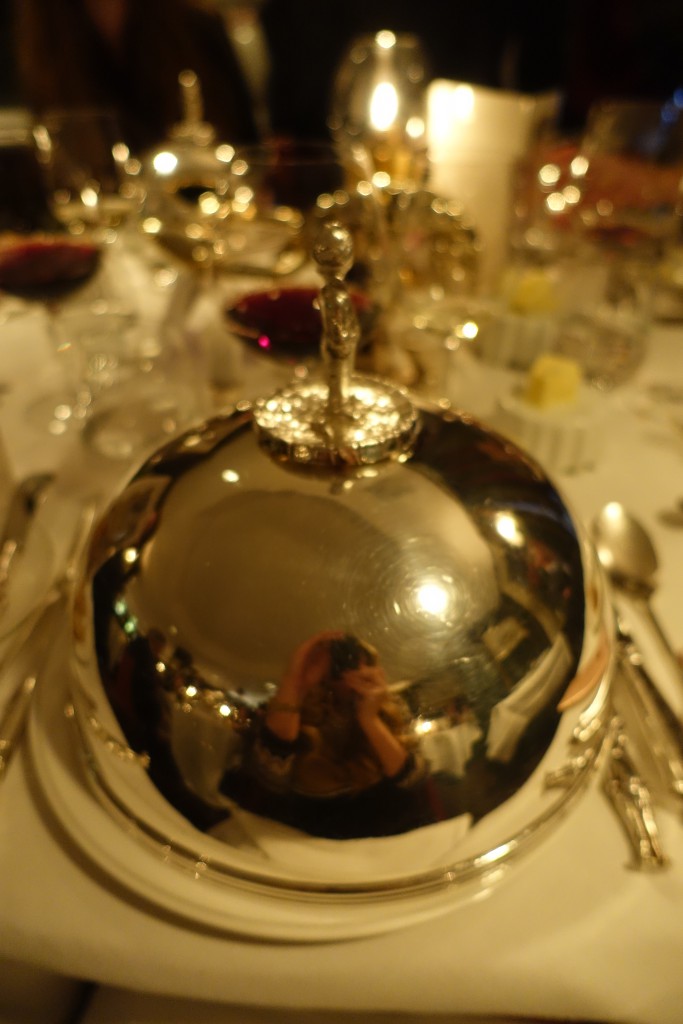 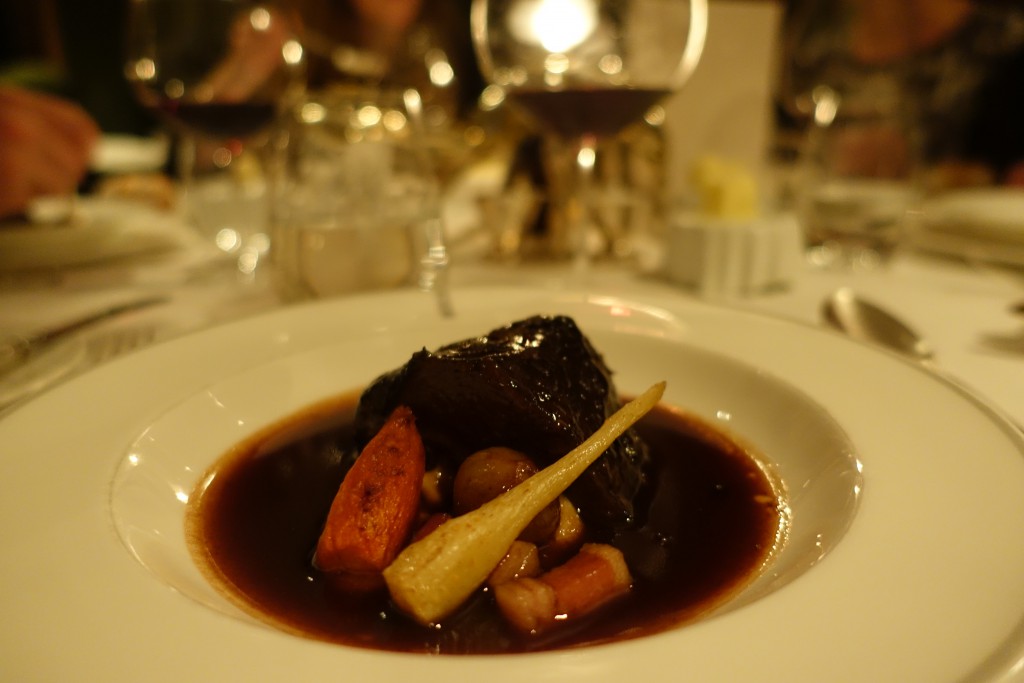 By this point, the end was nigh. But I wasn’t too be too disheartened as the cheese board arrived before me. It was more than a metre long. I kid you not. From Ossau Iraty to ‘Stinky Bishop’, there were cheeses galore and all of them were too gouda to choose from! 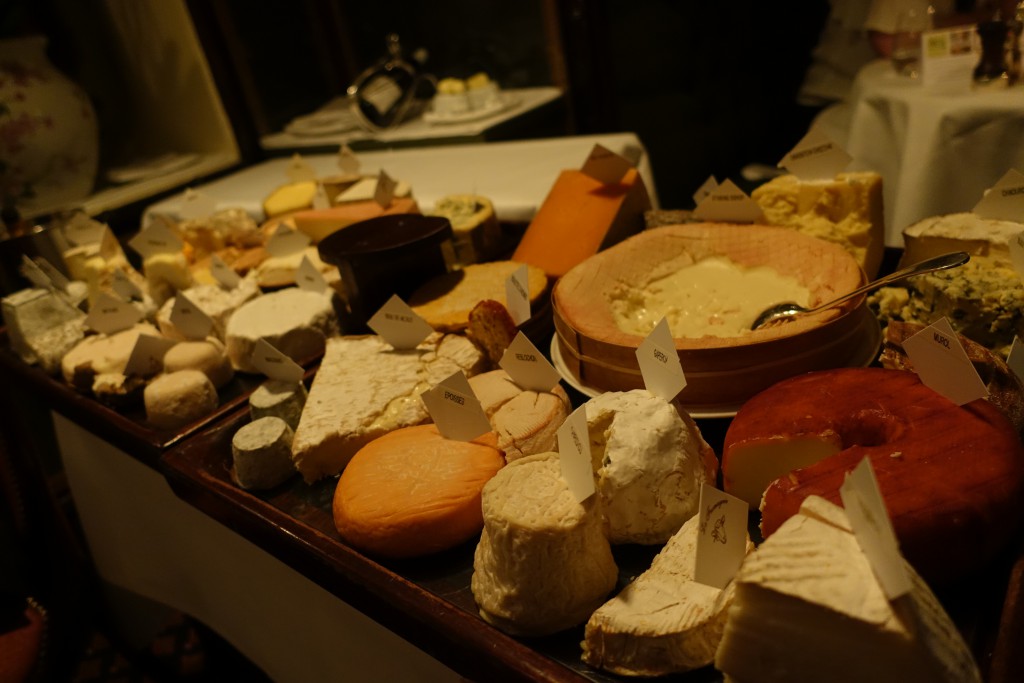 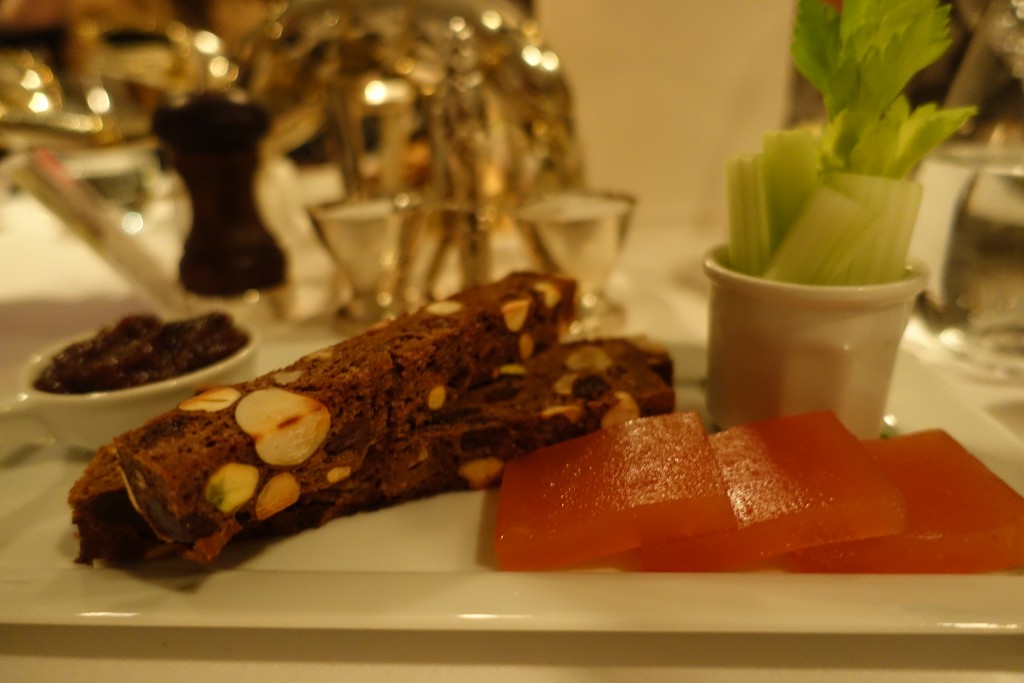 Finally, the dessert arrived and it was a pistachio and chocolate cake with dried fruit soaked in rum, accompanies by a bitter chocolate sorbet. I don’t normally like pistachio and the fact this dessert made me like it, means it did more than a fabulous job. 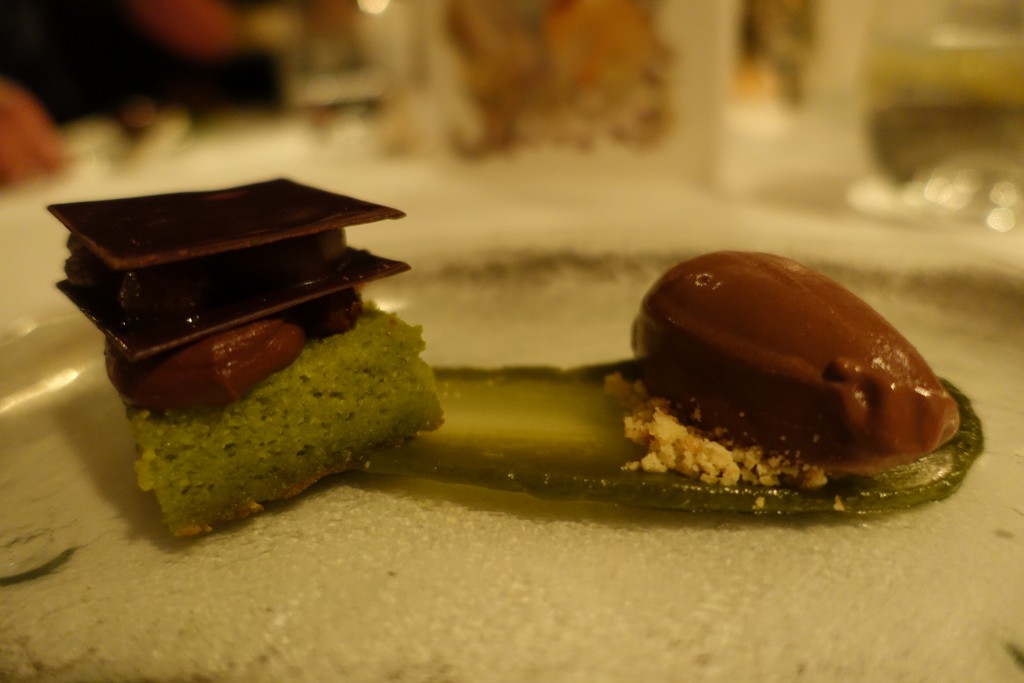 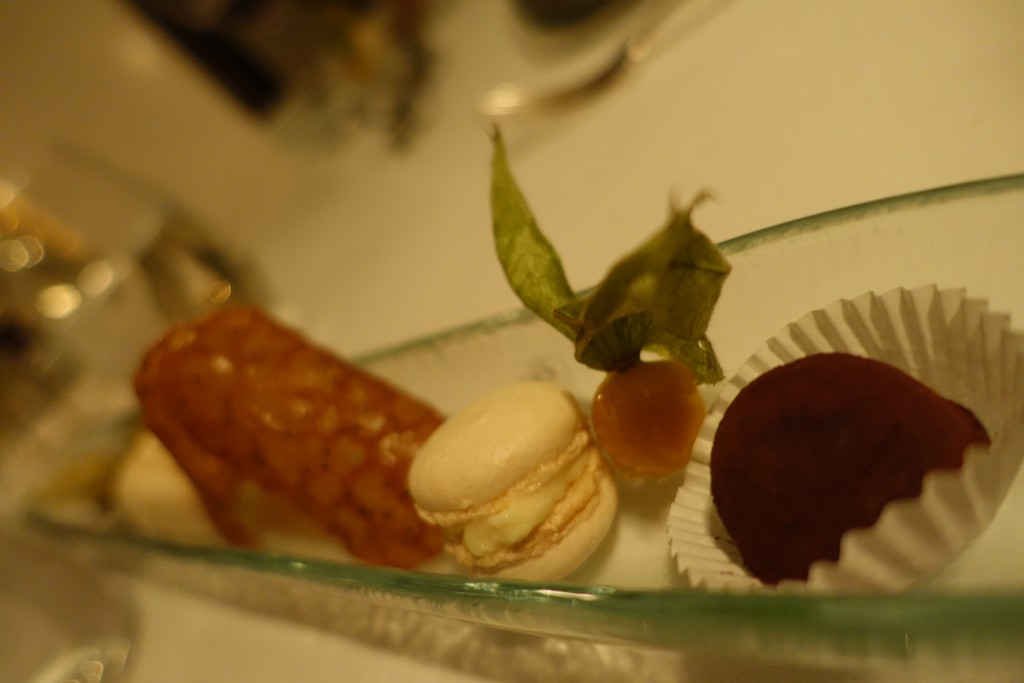 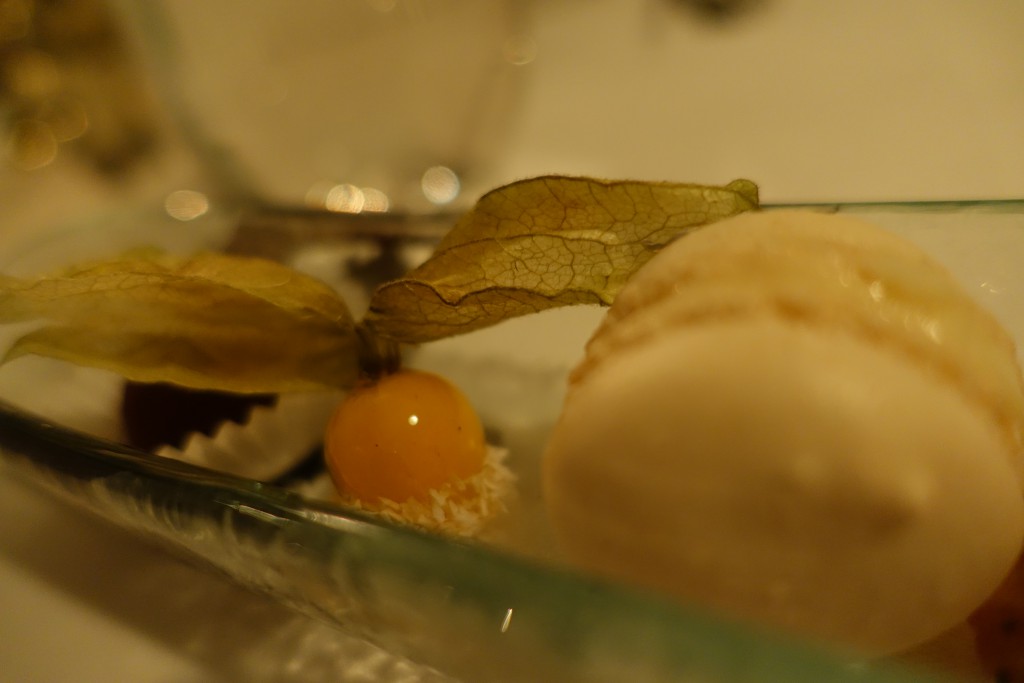 We then had a choice of tea and coffee with our petits fours. I went for fresh mint tea to cleanse my palette post-meal and the petits fours which accompanied this included a candied physalis, macaron and brandy crisp.

Fully satisfied, we settled up and said au revoir to the restaurant.

I could probably say I’ve had the good fortune of being able to go to a few very high end restaurants such as The Square in London and Gaddi’s in The Peninsula in Hong Kong, but I would say that I had the best dinner of my life at Le Gavroche. Everything from the food, down to the service was truly impeccable and it highlights how Le Gavroche remains at the forefront of French cuisine and it’s no surprise it’s classed as a UK institution.