It’s about this time when people are booking last-minute holidays, or even ones really far in advance – we start to see the slightest bit of sun in England and people are in flip flops, boys don’t bother with shirts and everyone’s planning their three month summer heatwave they positively believe has already begun!

Therefore, I thought it was about time I shared my international escapade to a little island called Kefalonia. It’s a Greek island, nestled inbetween Zante and mainland Greece, not far from Corfu and is the most beautiful and untouched place I have honestly ever had the pleasure of visiting. 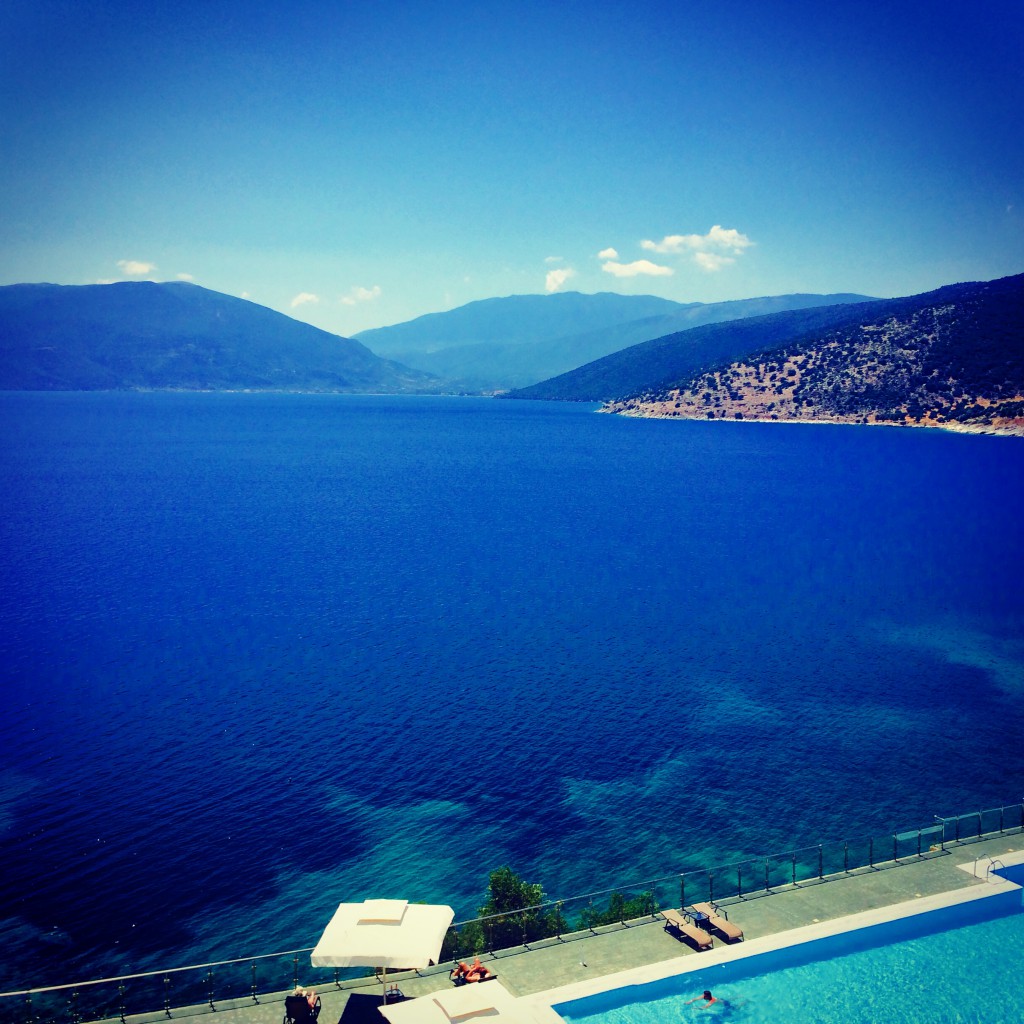 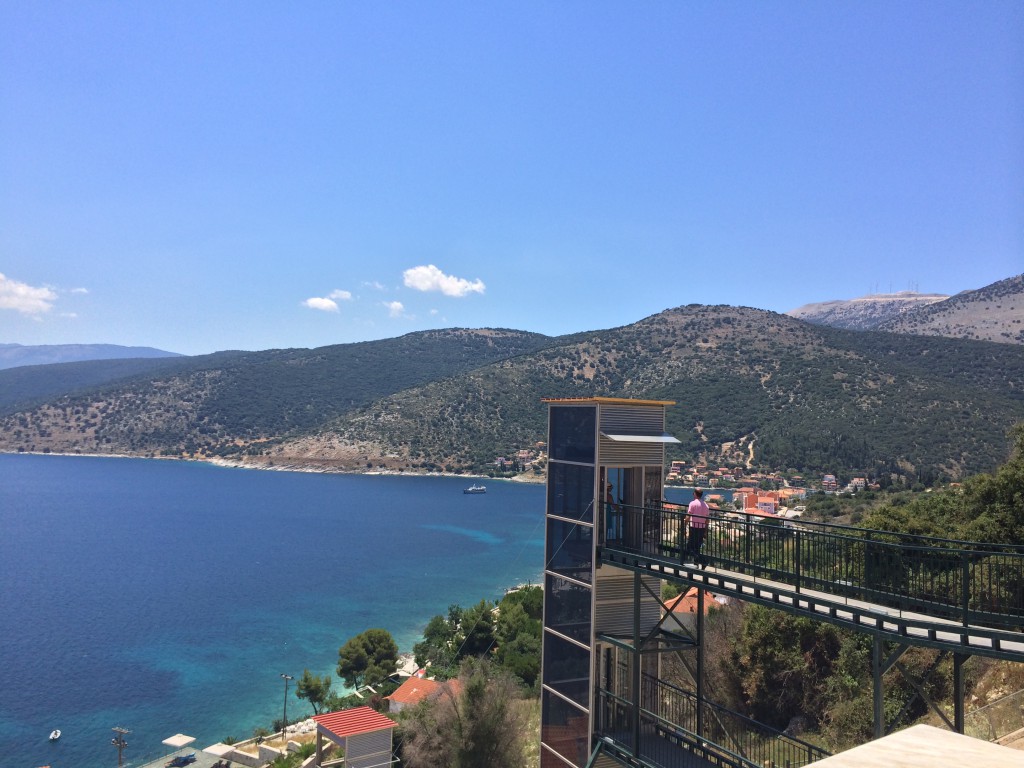 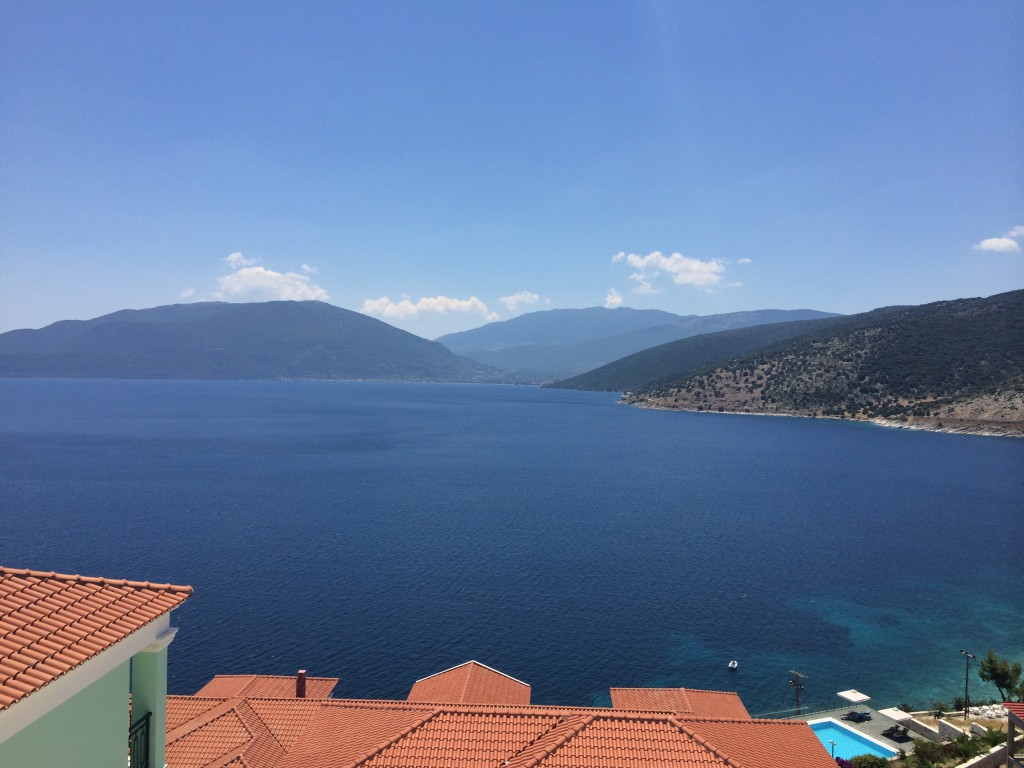 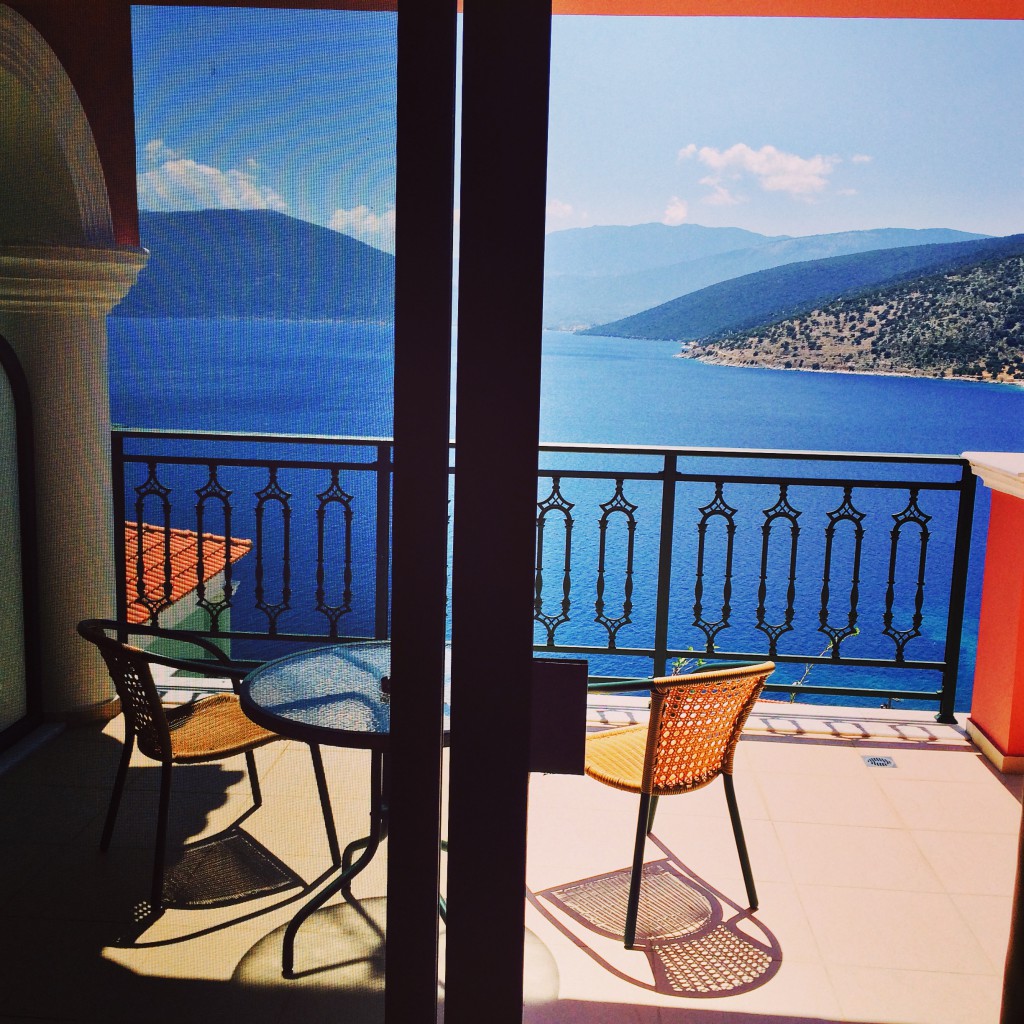 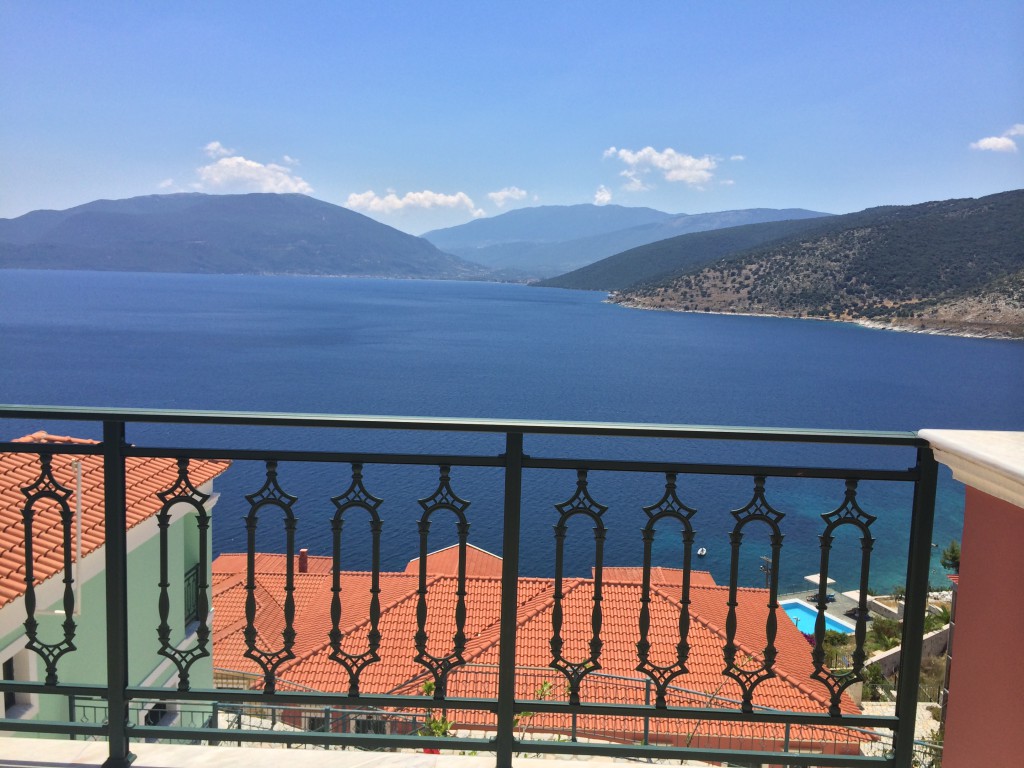 I didn’t just want to tell you about this sanctuary, but I felt the need as it’s the most underrated place I know. When I told my friends where I was going, all but one didn’t know where Kefalonia was, or had even heard of it and most of them are seasoned travellers, so I was pretty excited to explore a place that didn’t seem flocked with tourists or appear a party-centric environment. Another reason and a big one at that for why I also wanted to go there, is because Louis de Bernieres’ ‘Captain Correlli’s Mandolin’ is my favourite book, which happens to be set in Kefalonia. This also says something about how good the book is as it was written so descriptively it made me want to visit the island!

We stayed at a hotel called ‘Kefalonia Palace Hotel’. Unlike a normal hotel, it had separate ‘apartments’ that were joined together on a hillside in rows – and we were so lucky to have got the best room in the entire place. We were right at the top on the corner so we were only attached on one side, had our own little balcony and the most stunning view – I had to pinch myself every time I woke up and shuffled outside in the morning! 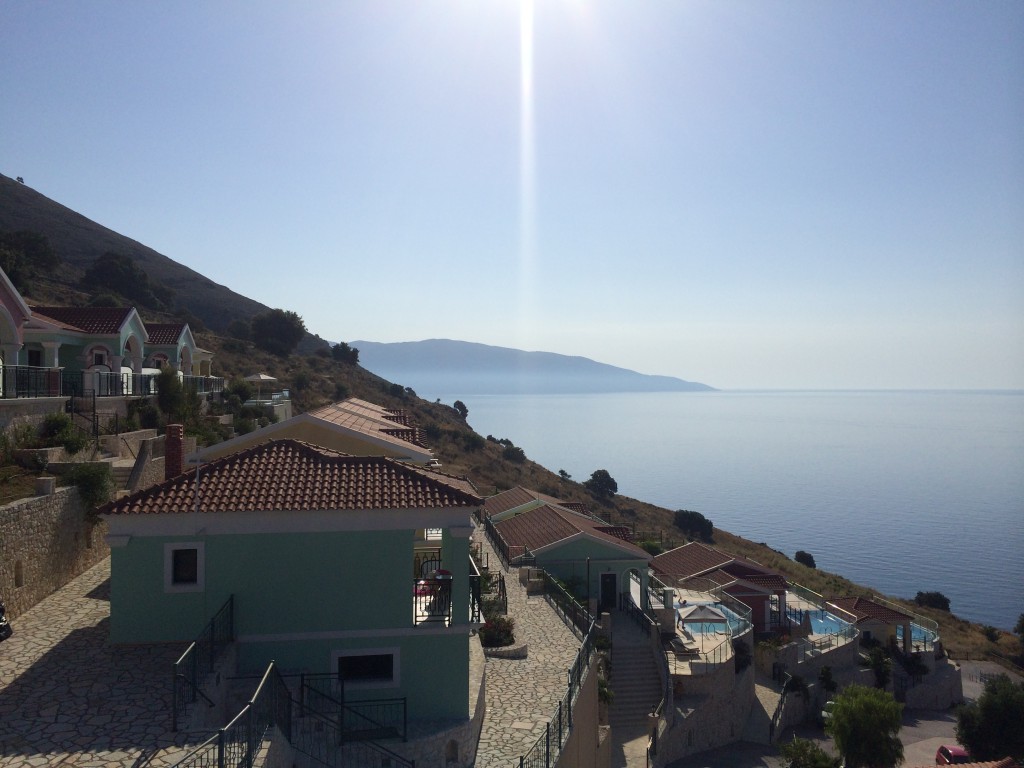 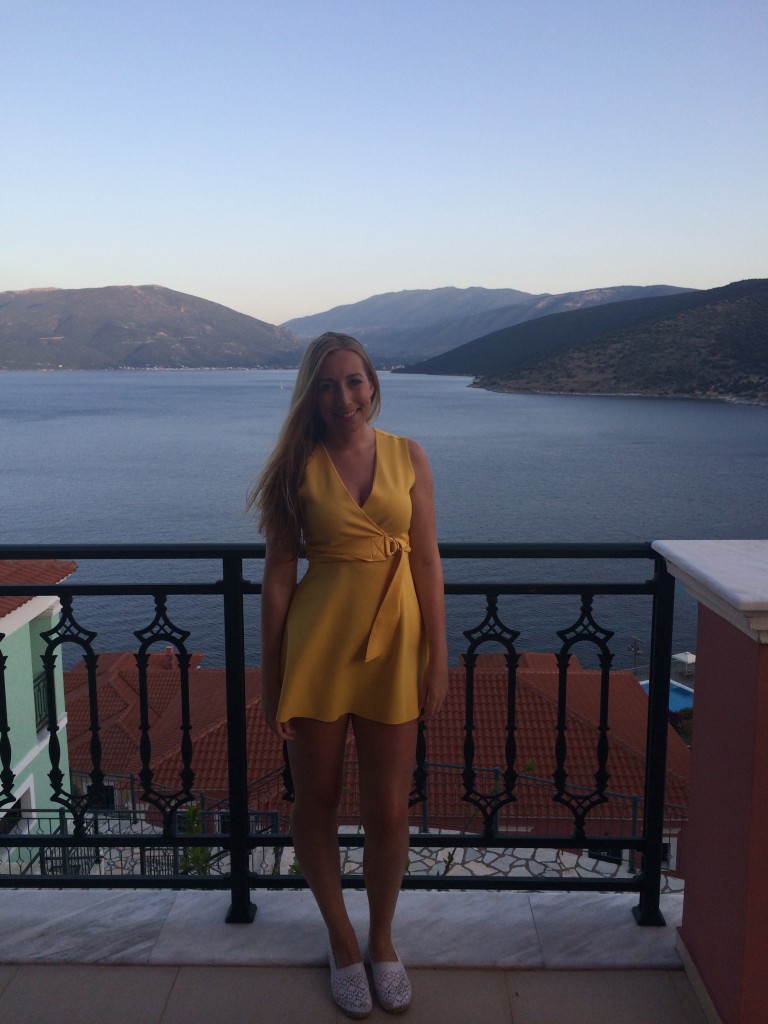 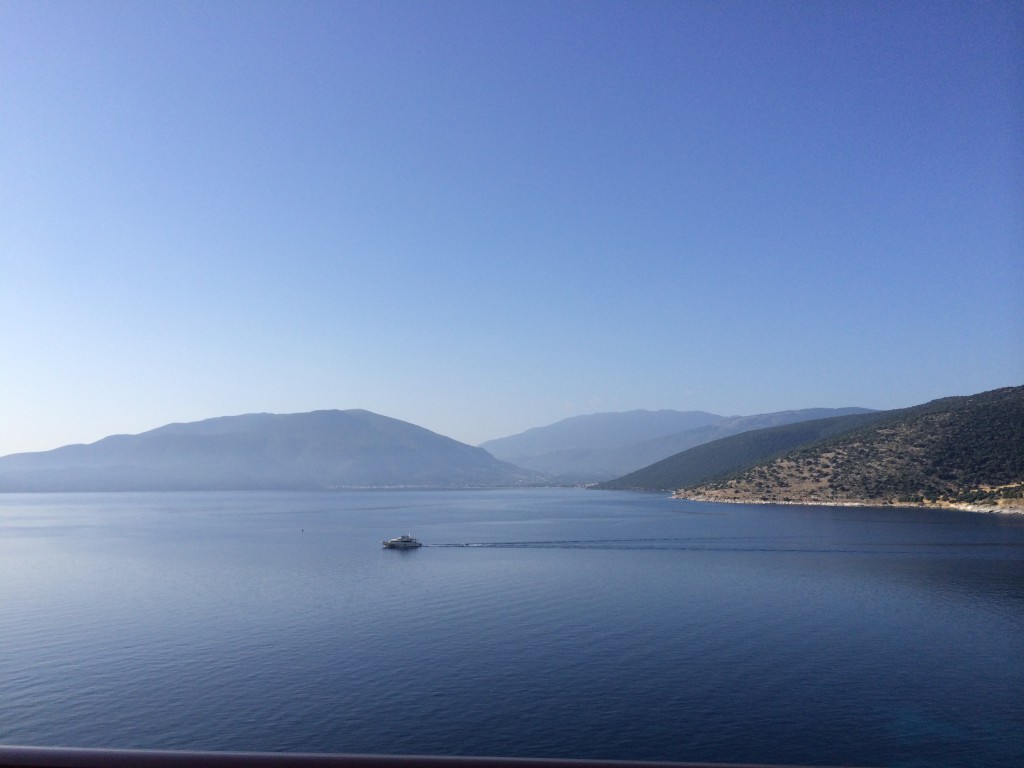 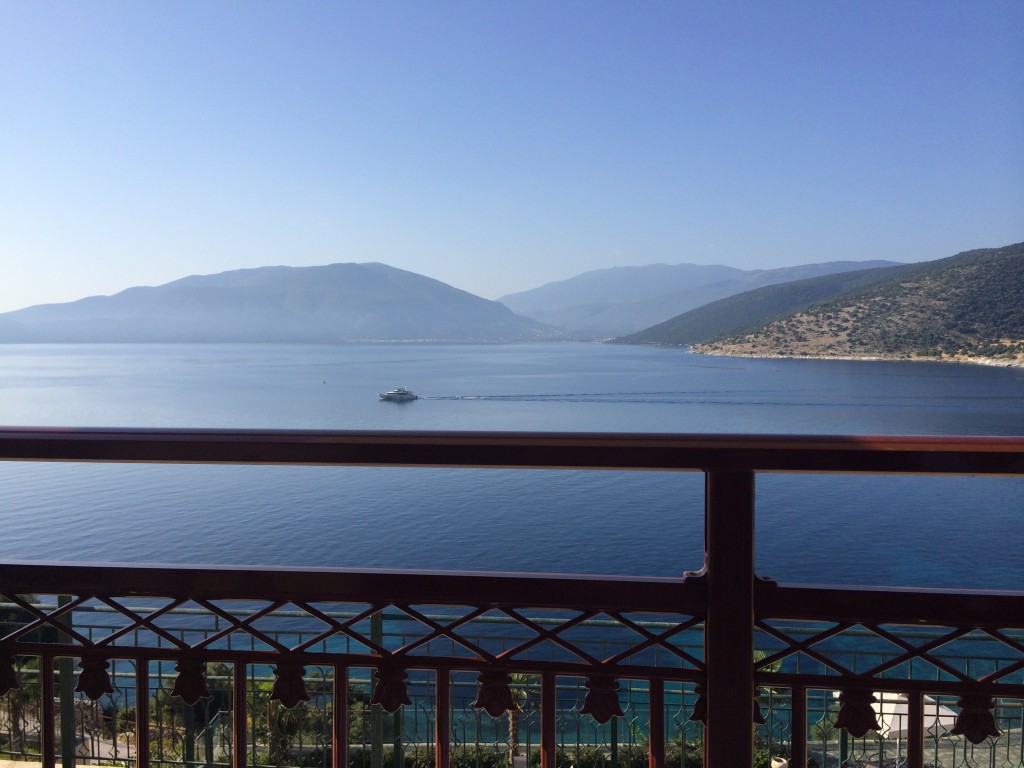 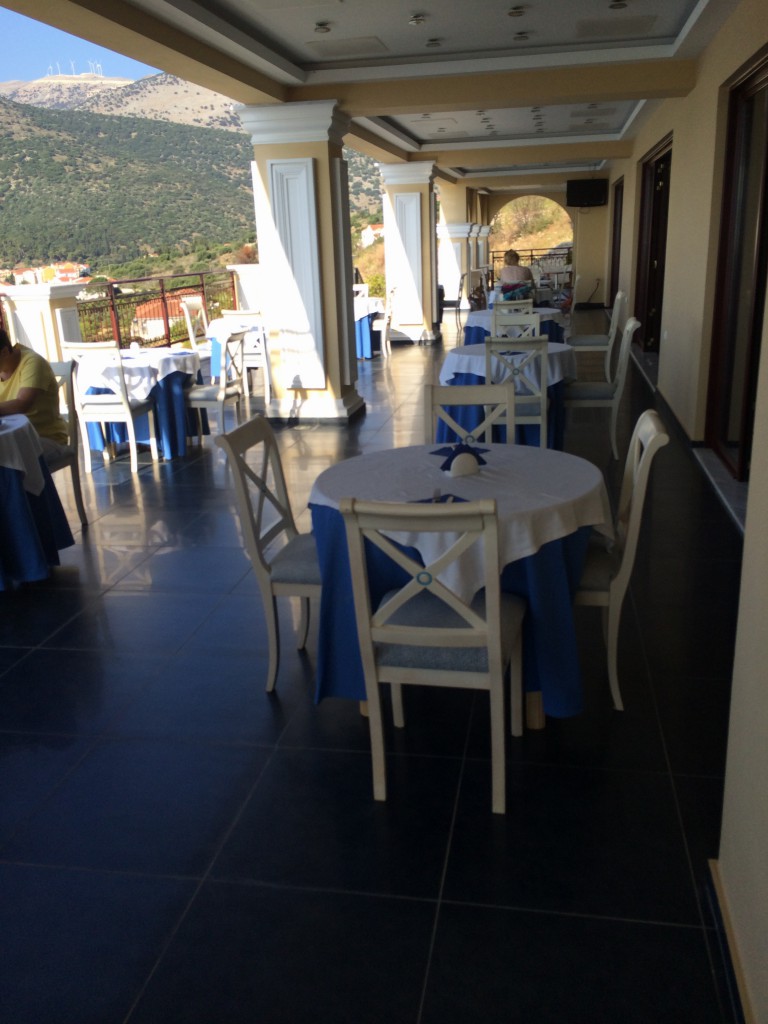 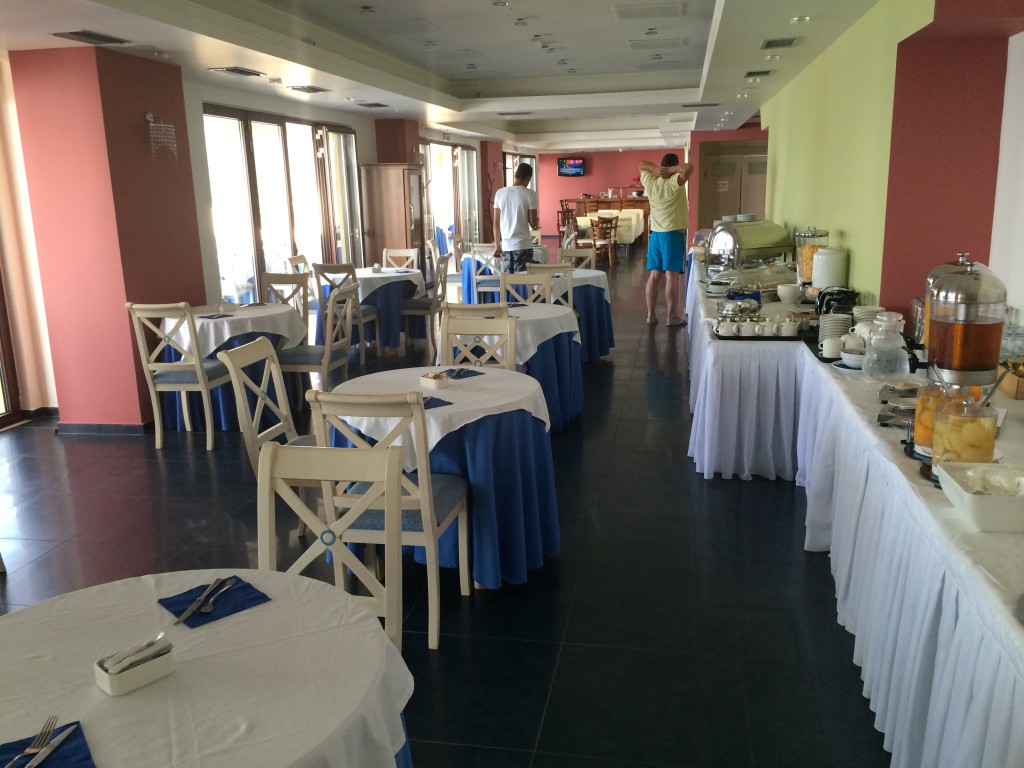 The hotel was in the area called ‘Agia Effimia’ which was east of the island (9km from Sami – which is where Captain Correlli’s Mandolin is set) and a good spot for if you want to visit other parts of the island easily.

A short walk from the hotel takes you down to the harbour, where you can rent speedboats for a day with ‘yellow boats’. It cost about £75 for the whole day (9 to 5) and you can go out (without any staff coming with you!) and explore the 12 remote beaches alongside the island shore. Yes, 12! All beaches are on one stretch and if you get there early enough, the world is your oyster, or in this case, private beach! We got there by about 10am and sped down the sea like I was in a bond movie, crashing into waves, with the wind blowing in my hair…but we clearly weren’t fast enough – lots of the good spots had been taken, but we managed to find a tiny little hidden beach everyone had seemed to ignore – it was a small beach compared to the others, but that was exactly what we wanted as we knew no one would want to share it with us. 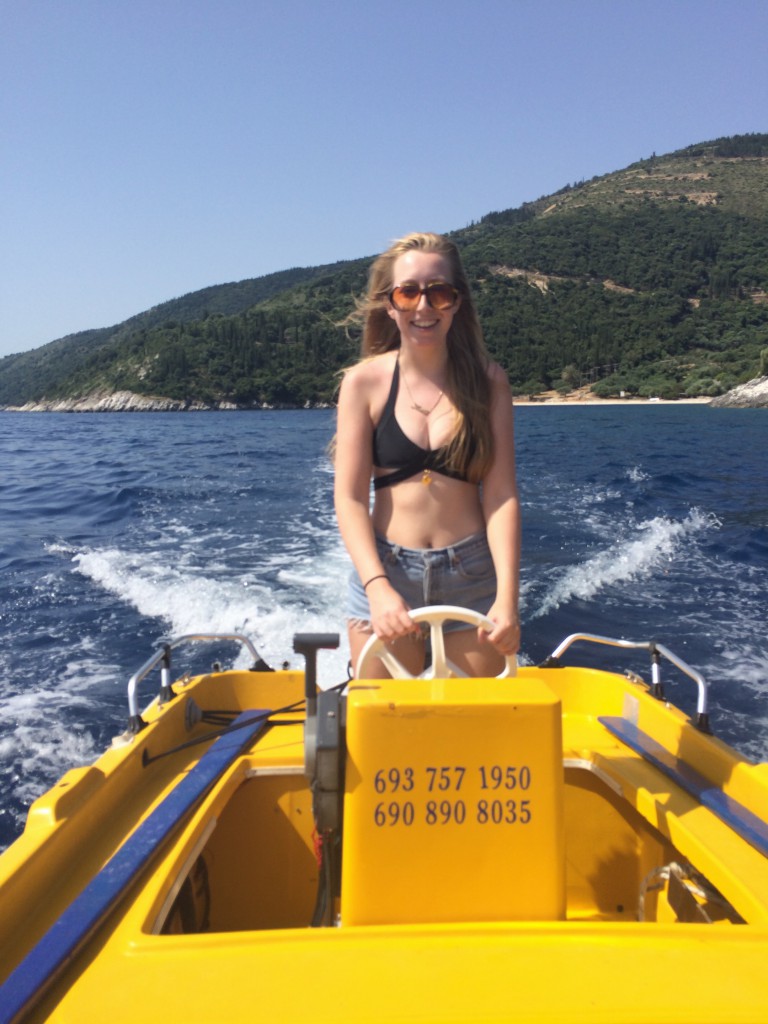 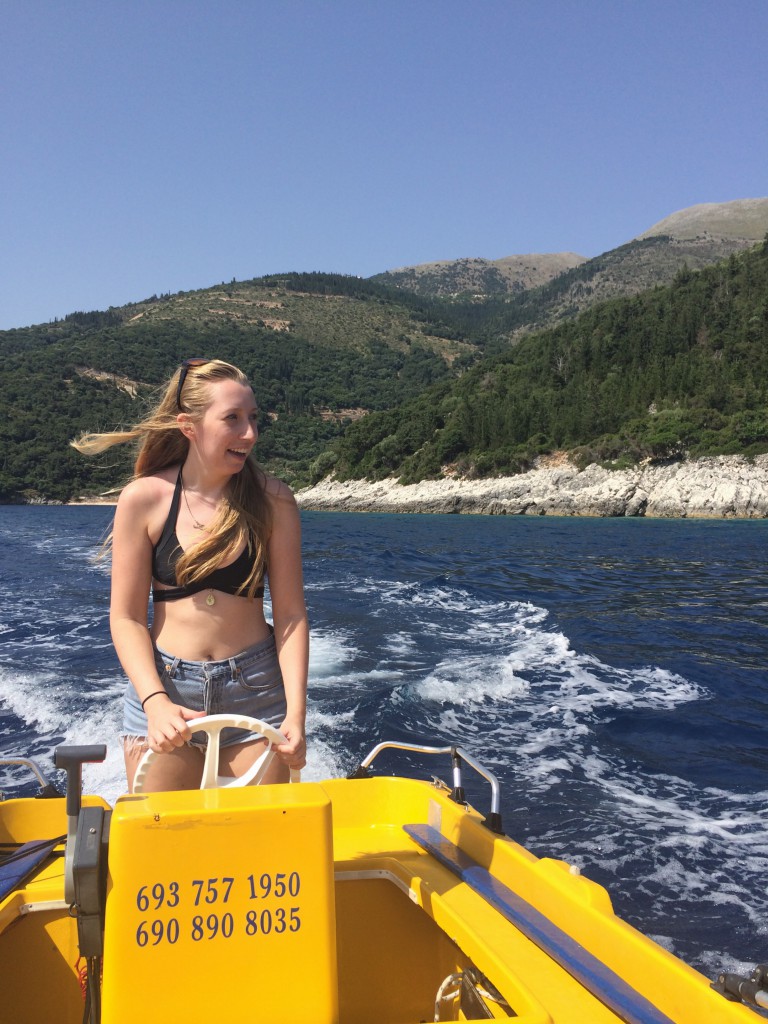 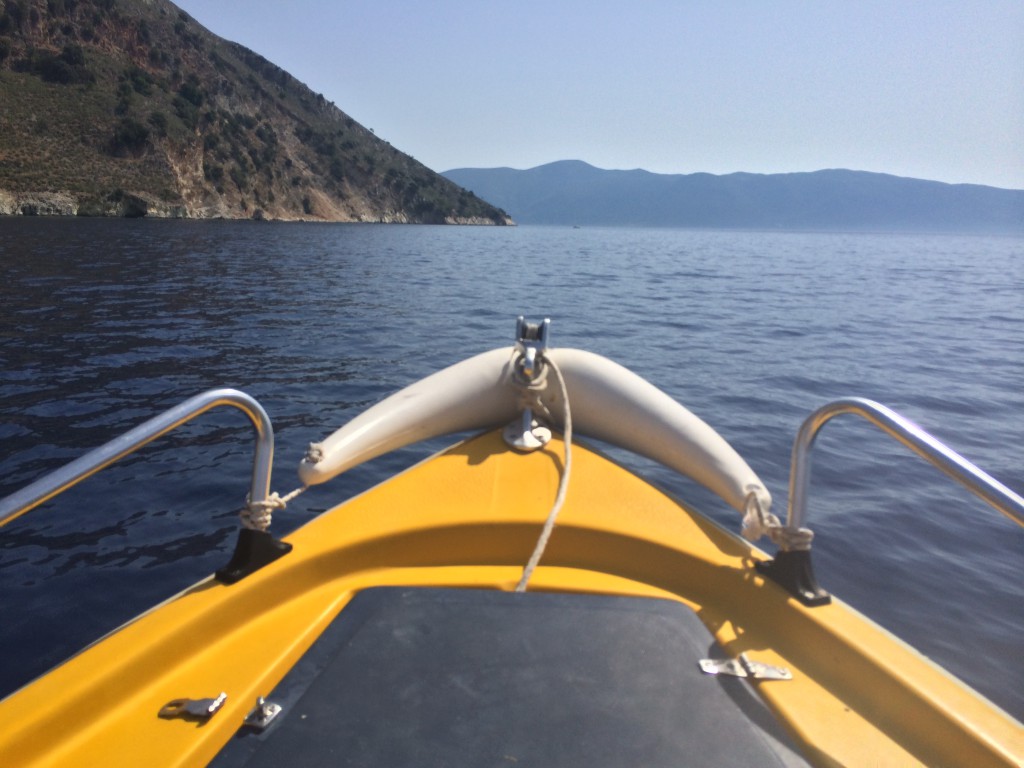 We spent the entire day snoozing in the sunlight, jumping off the boat into the crystal clear water as well as snacking on meats and cheese and slurping San Gerasimos (the island’s wine – which I’ll write another post about!). I’d recommend you to buy your food from the local shops in the town before you go on the trip as you’ll be there the whole day – and if you’re anything like me and have a big appetite, you’ll want some rations! 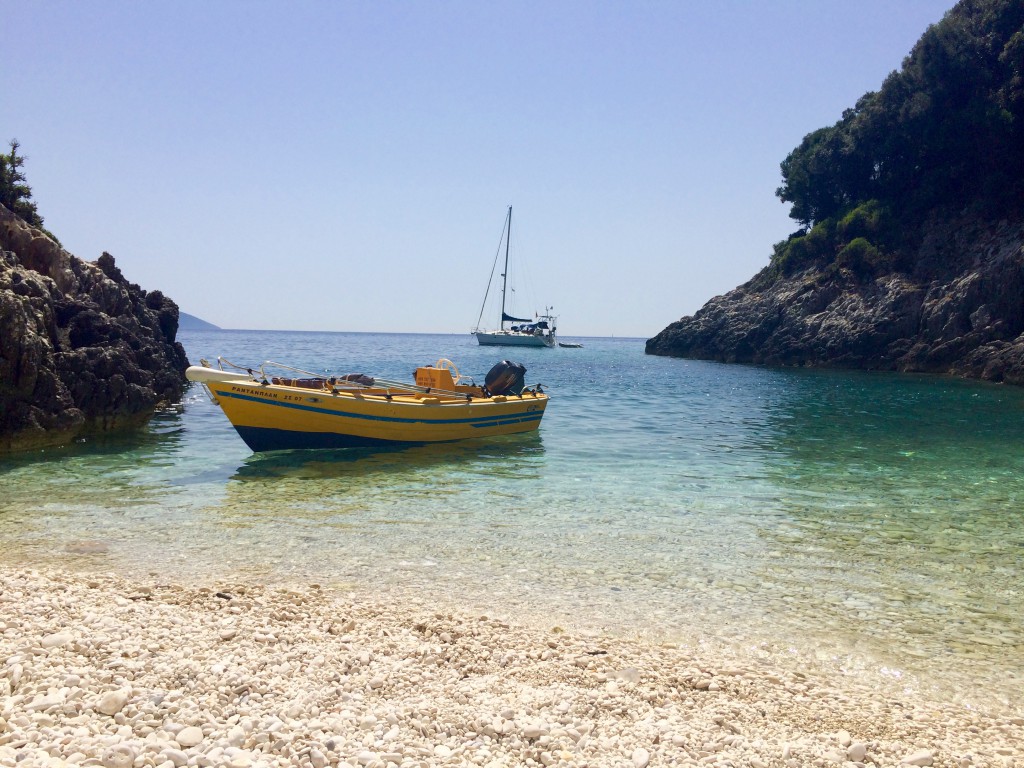 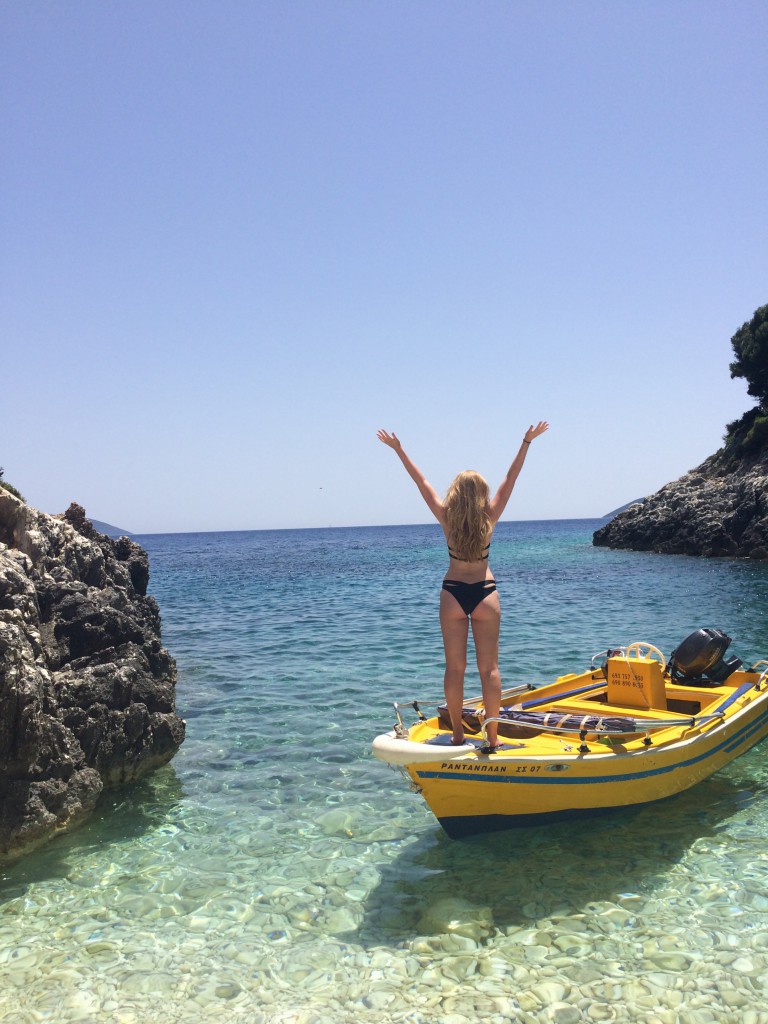 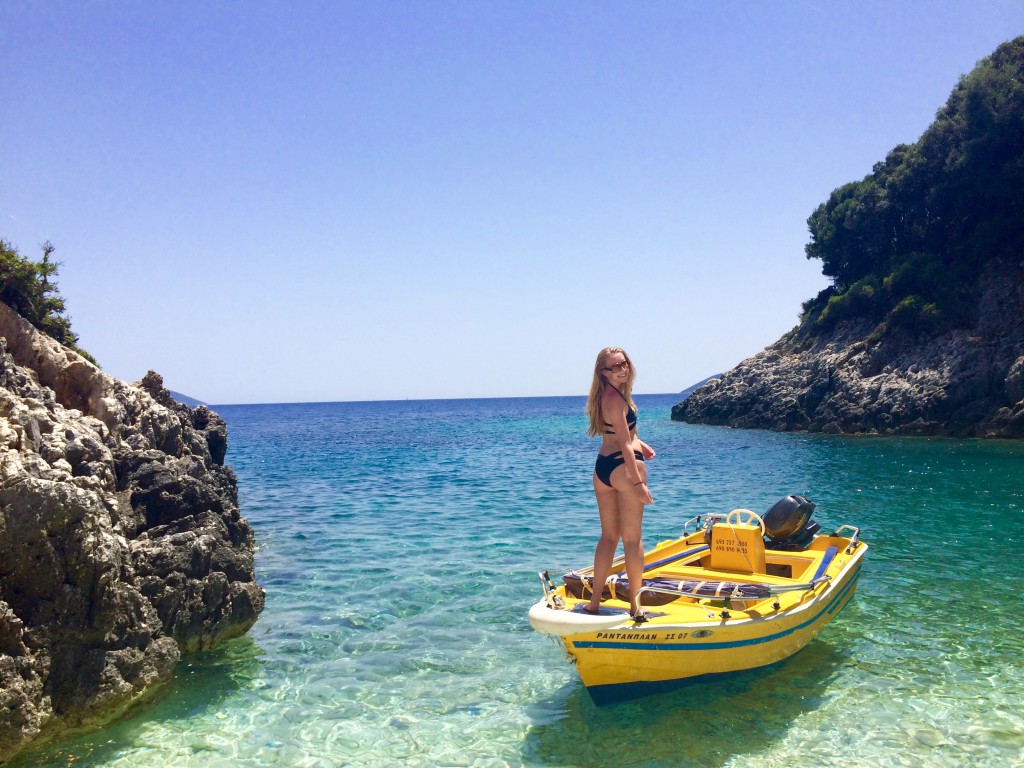 Overall it was a totally blissful day and one that I’ll treasure forever.