Considering my blog is called ‘Essentially English’ you would have thought I should have travelled to many parts of the country but alas, that’s more what’s on the bucket list rather than current reality and I’ve never really ventured up north much apart from Lancaster when I used to visit my sister at Uni (comment if you’ve ever been to sugar house haha)!

So, when an opportunity at work came up for me to go to Manchester I was super excited – plus one of my really good friends is from there so it was an excuse to see her too!

I stayed at the Hilton Deansgate in one of their executive rooms all the way up on the 20th floor. And my. God. The views were stunning. You can see the whole of the city from the comfort of your room. The rooms themselves were spacious clean and comfy. Every morning I got up to see the sun rise on the horizon sipping my cuppa coffee. 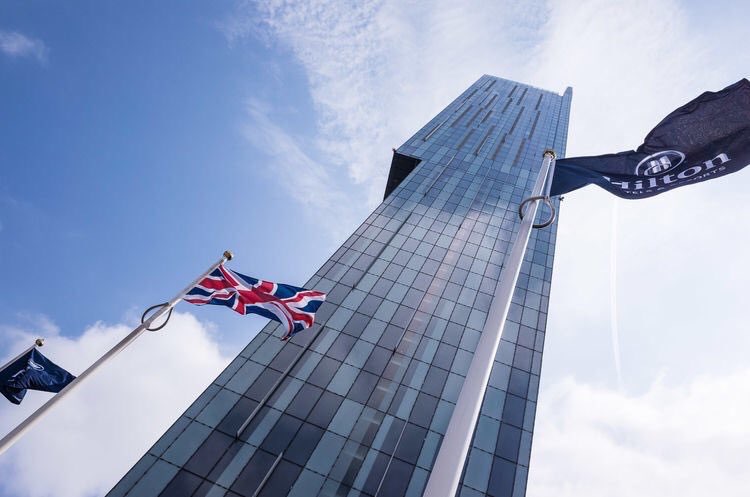 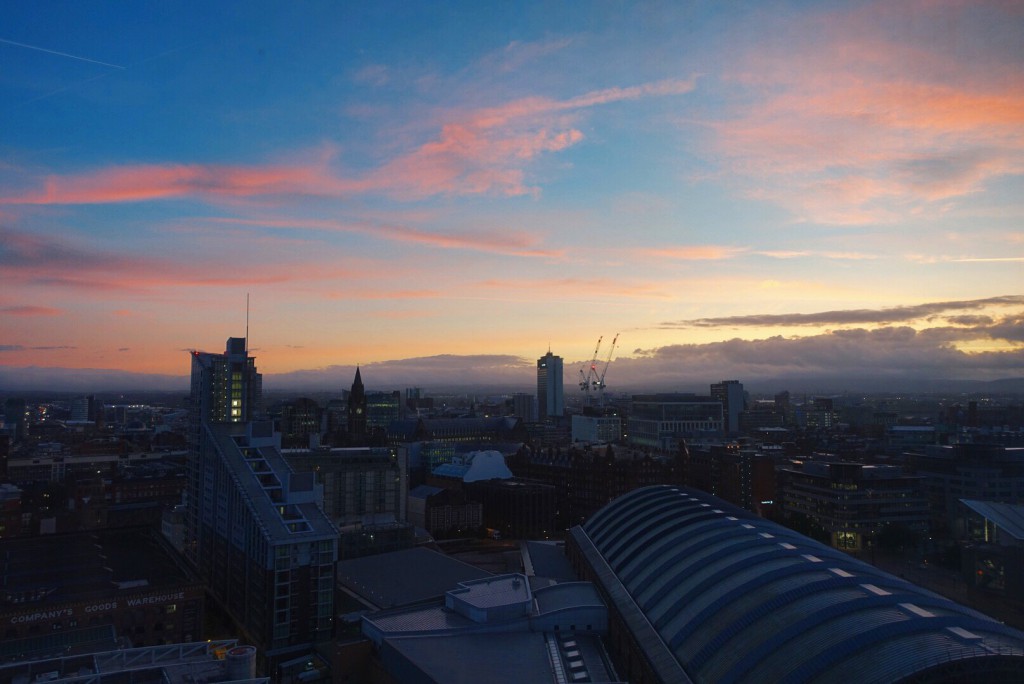 For breakfast there’s 2 options: the full spread on the ground floor or the exec lounge on the 23rd floor where you get some views on the side of your full English. Naturally, I decided to choose the views and indulged in all of the pastries and fresh fruit there was on offer. 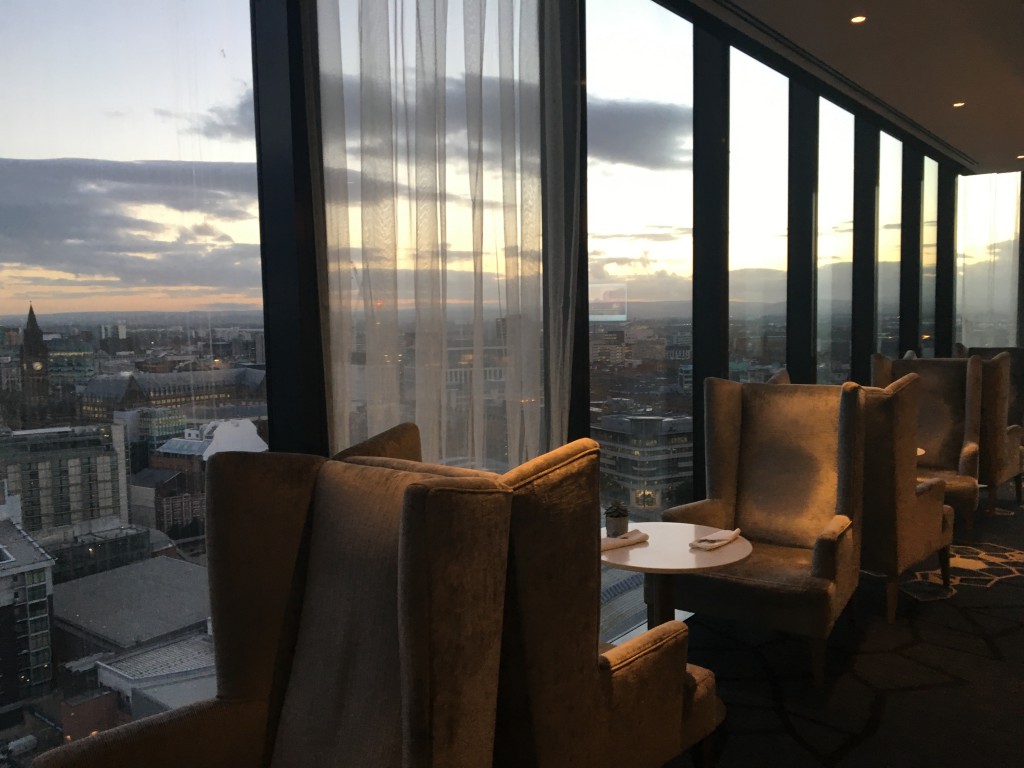 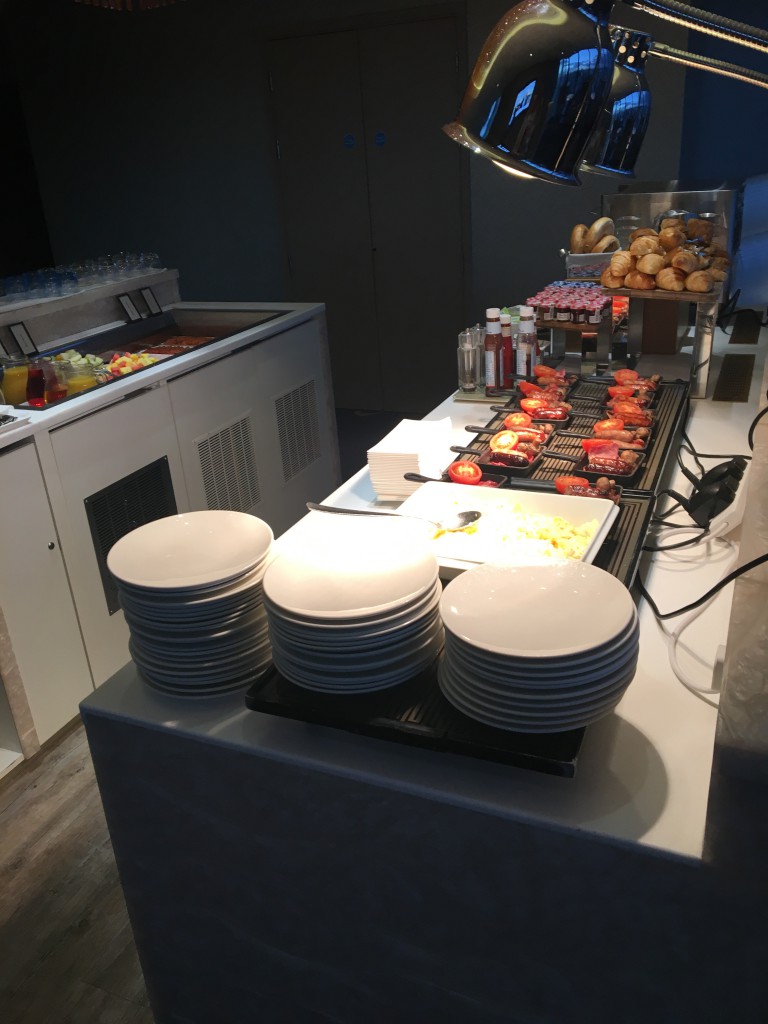 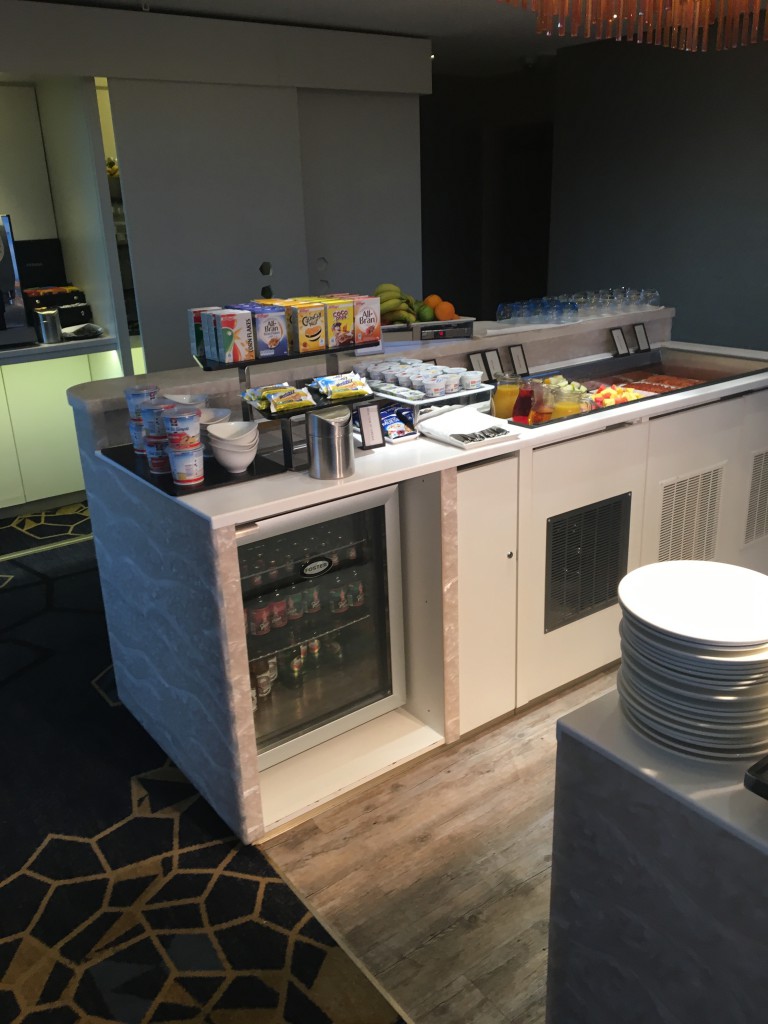 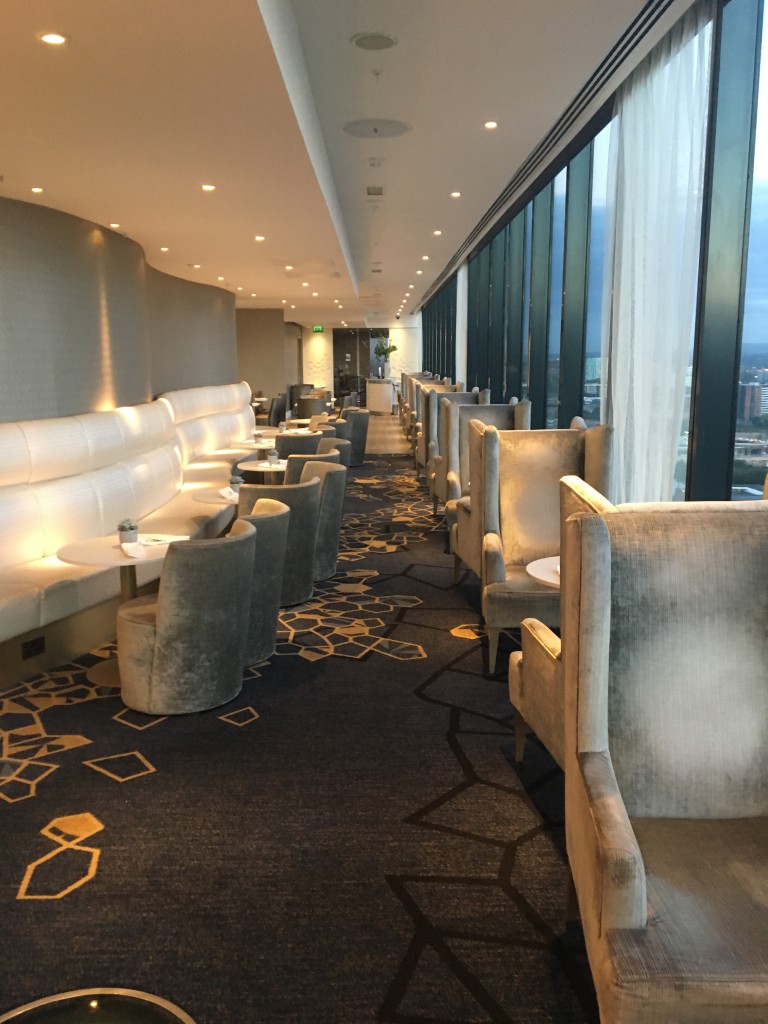 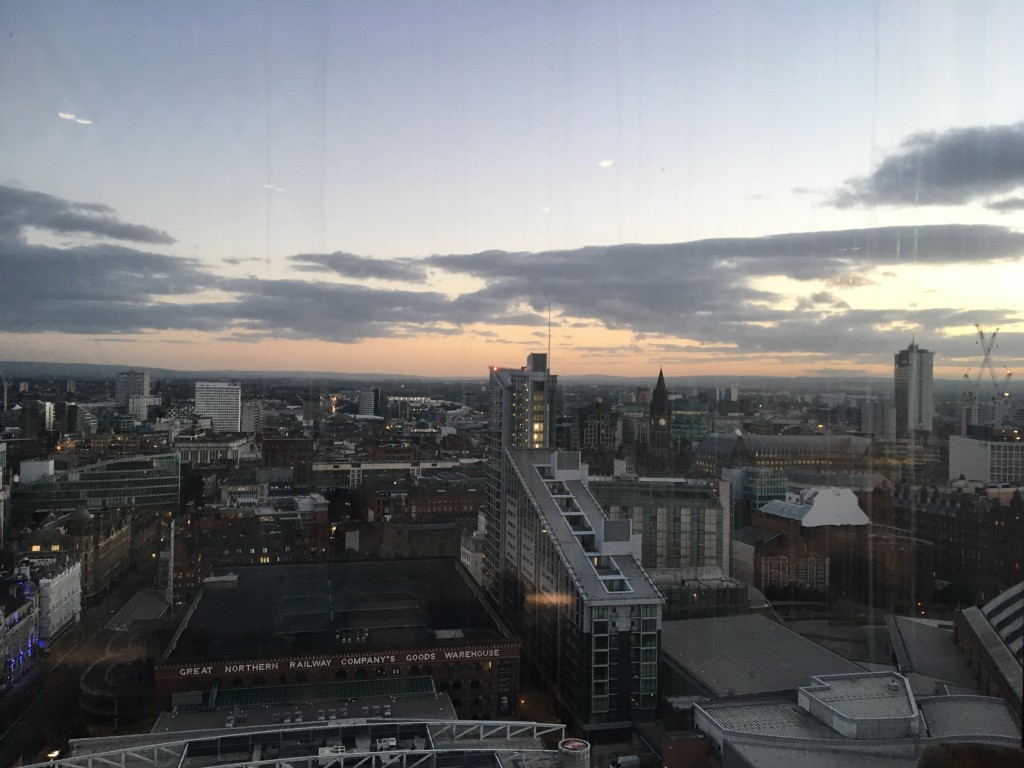 When it gets to the evening, I’d highly recommend going to Cloud 23 bar which again looks over the whole of the city, and there’s a glass floor area which looks all the way down 23 flights of the building. Pretty sick stuff. 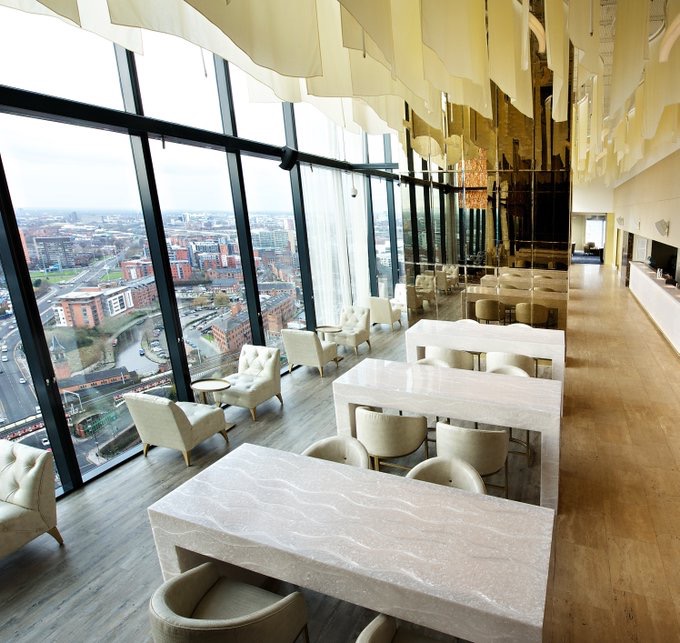 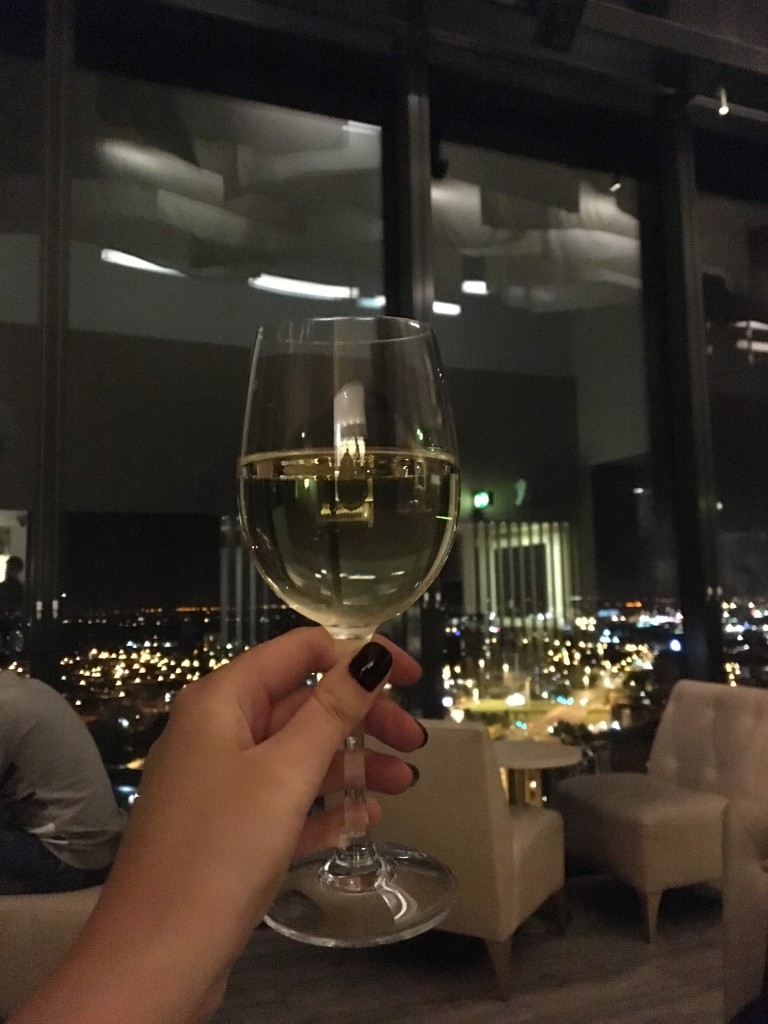 It’s pretty swish so I’d dress up a bit, but if you’re staying at the hotel you can probably get away with a bit more. However, I felt super out of place in my trainers. Drinks are delicious and not too badly priced if you’re used to London! Expect a cocktail to be between £10 – £15. Great date place if you’re trying to wow someone.

There’s also a super nice spa pool and gym which I would recommend you take full advantage of if you’re there! Unfortunately, I barely even had time to dip my toes in the pool but it looked seriously inviting. 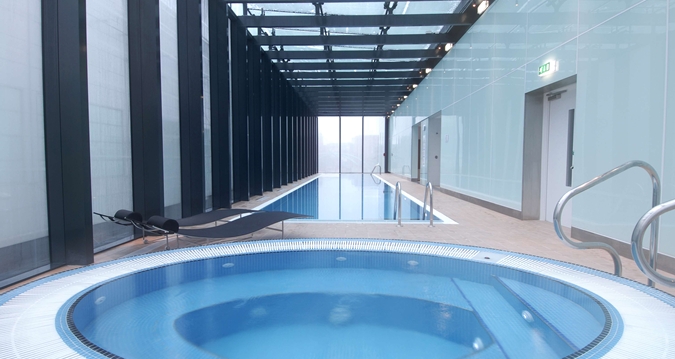 Outside of the hotel, theres loads to do but because we only had a short space of time there we used our time wisely.

After mine and my friend’s work event was over we headed to big Red’s True Barbecue for some burgers – we’d heard rave reviews about this donut burger? So were massively intrigued. And oh my it did not disappoint. Think salty but sweet, succulent and tender. And don’t even think about going there if you’re counting calories. I dread to think how many was in that meal but it’s oh so worth it. We also had a side of sweet potato fries for good measure and they have about 6 different barbecue sauces which is a nice change compared to the usual ketchup scenario. 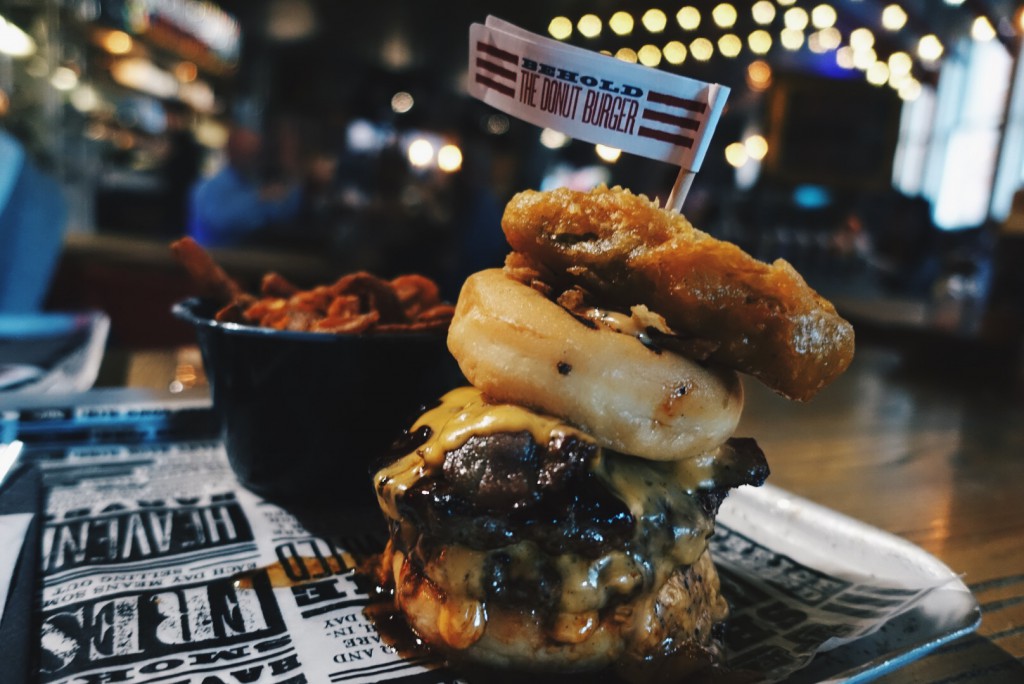 The next morning was still a working day so we holed ourselves up in Joe and the Juice (ground floor of Debenhams if you’re wondering) and I went for my go to: Go away doc juice, avocado sandwich, ginger shot and flat white coffee. You can’t beat the combo.

After we’d finally finished work for the week we decided to dance the night away at Vodka Revs… I won’t insert all the details here as I’m sure you can imagine what a night out consisted of haha but here are a few pics from my snapchat… speaking, of if you haven’t added me please do – I snap alllll day erryday – it’s ‘flaxenone’ – don’t ask – an old nickname which I’ll tell a story about another time ha! 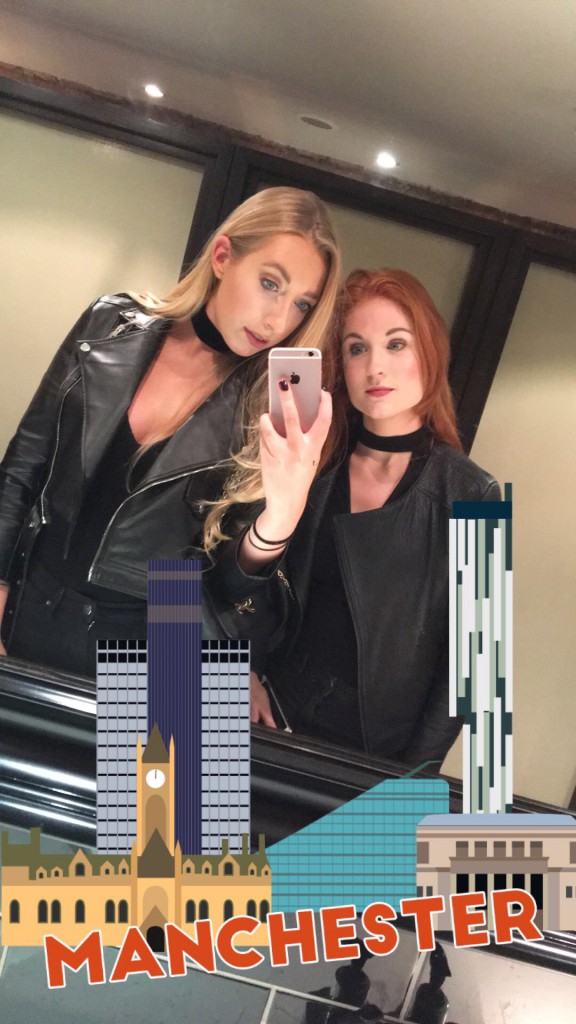 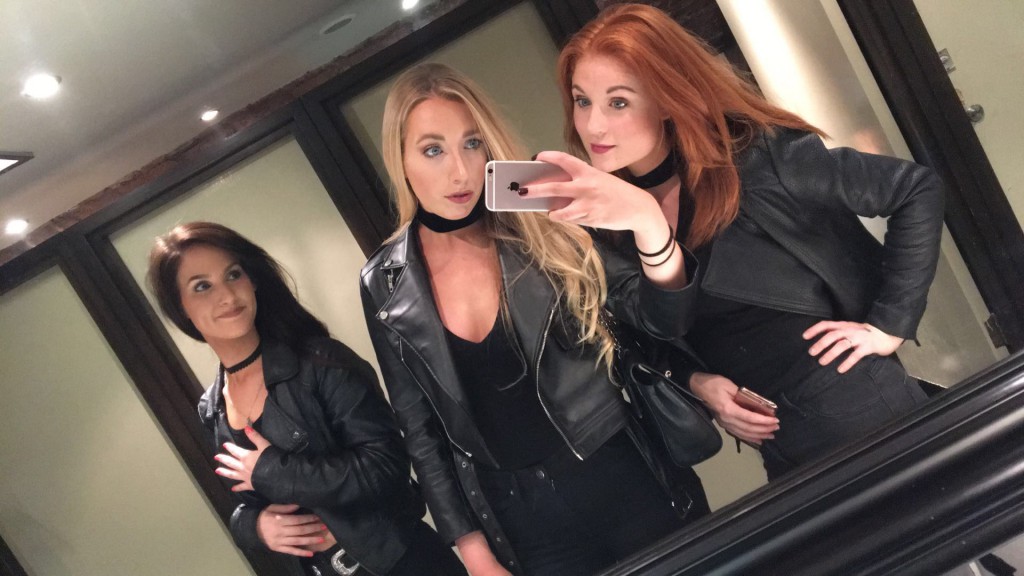 Can you see we we got the ‘all black errrthang’ memo chokers and all? 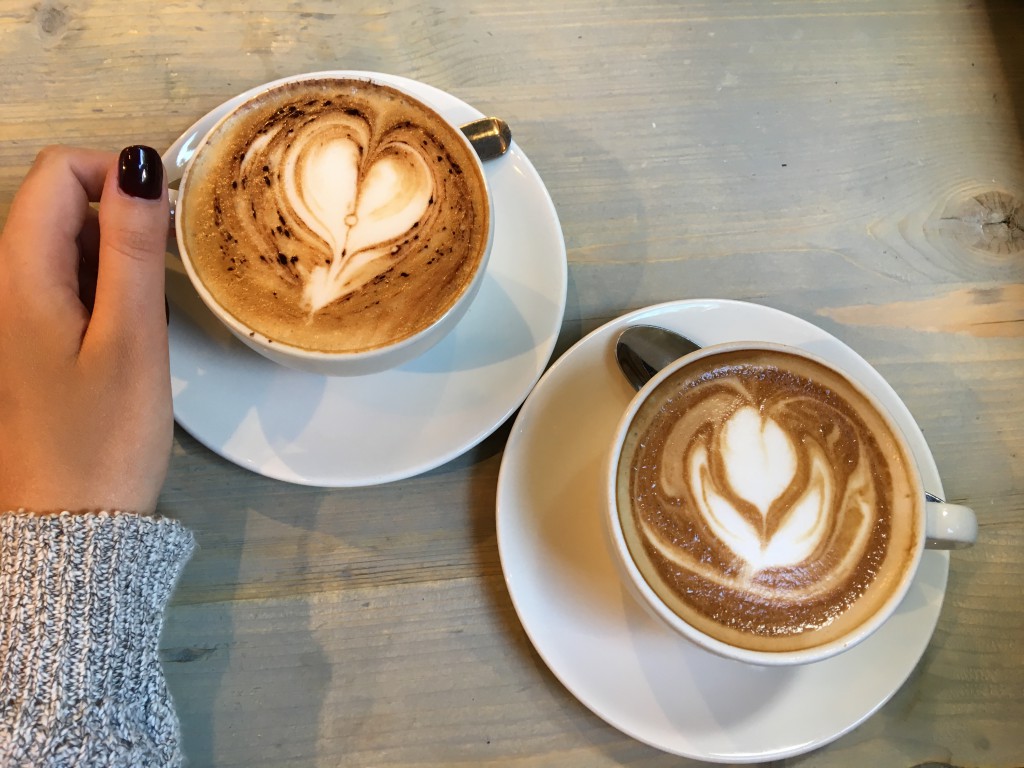 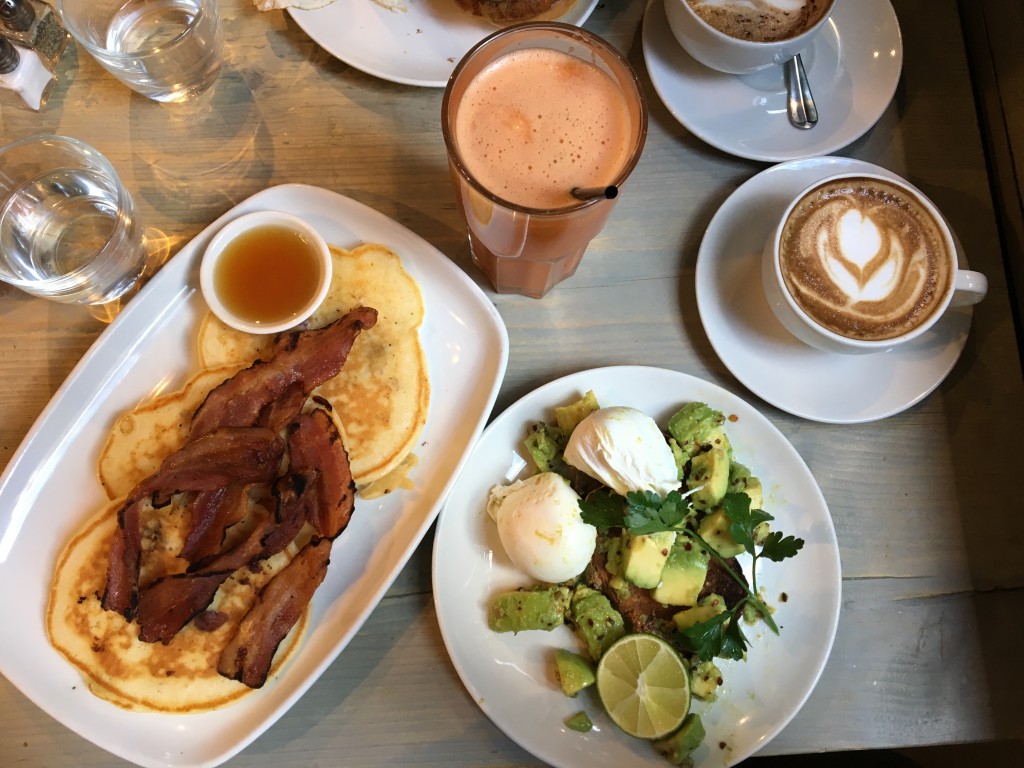 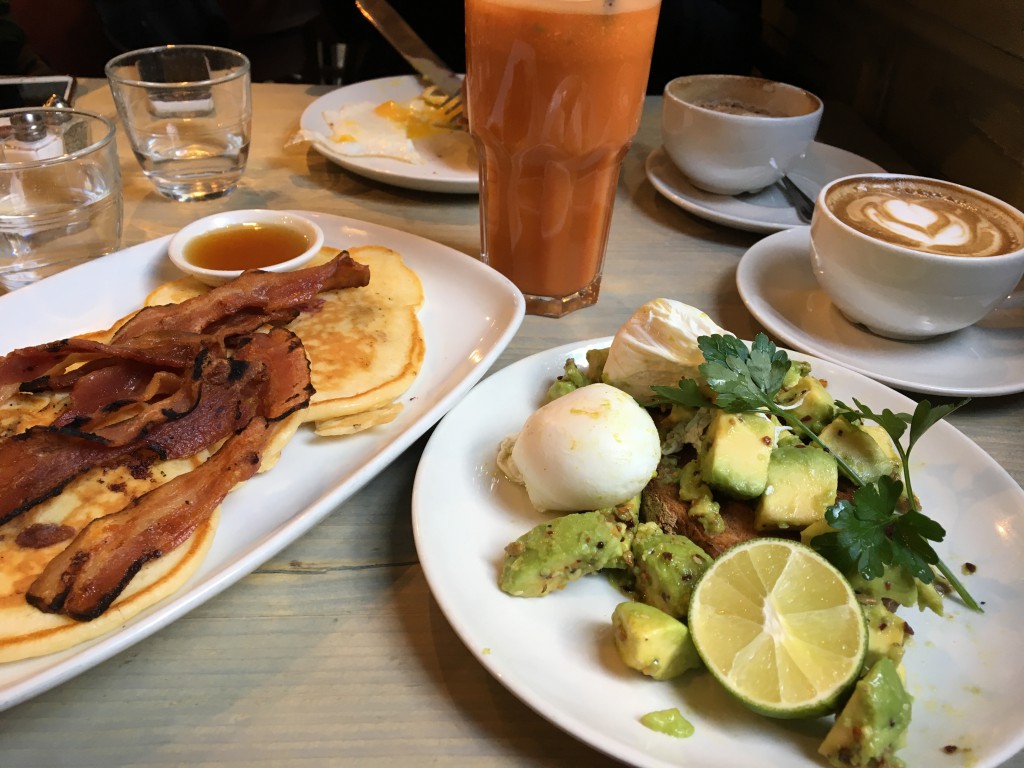 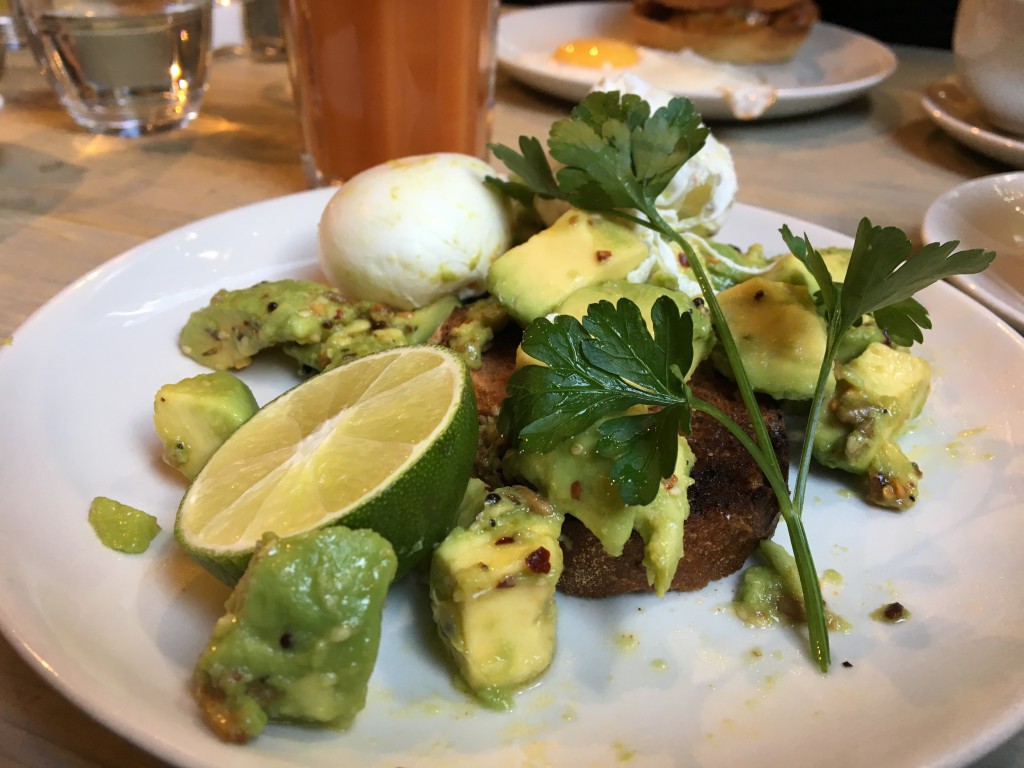 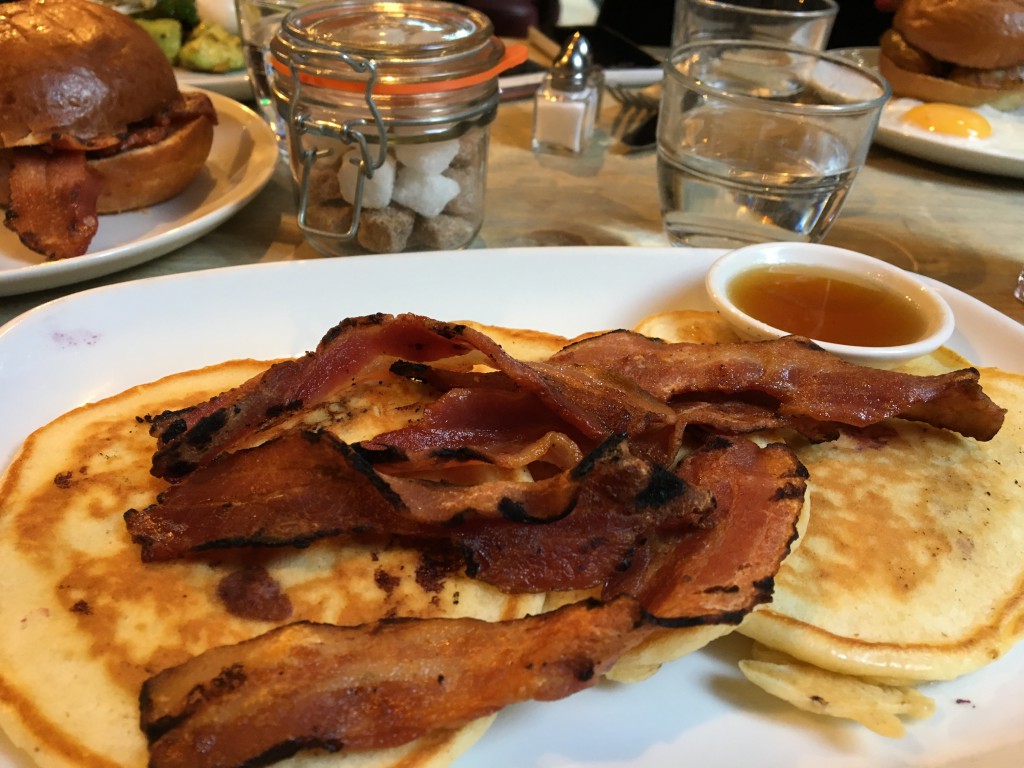 Afterwards, we did a little shopping, damaged the bank balance and then my friends had to leave so I decided to do a bit of exploring on my own…

First up I just wanted to walk around the city and take it all in. I love all the buildings and the architecture like the town hall below… 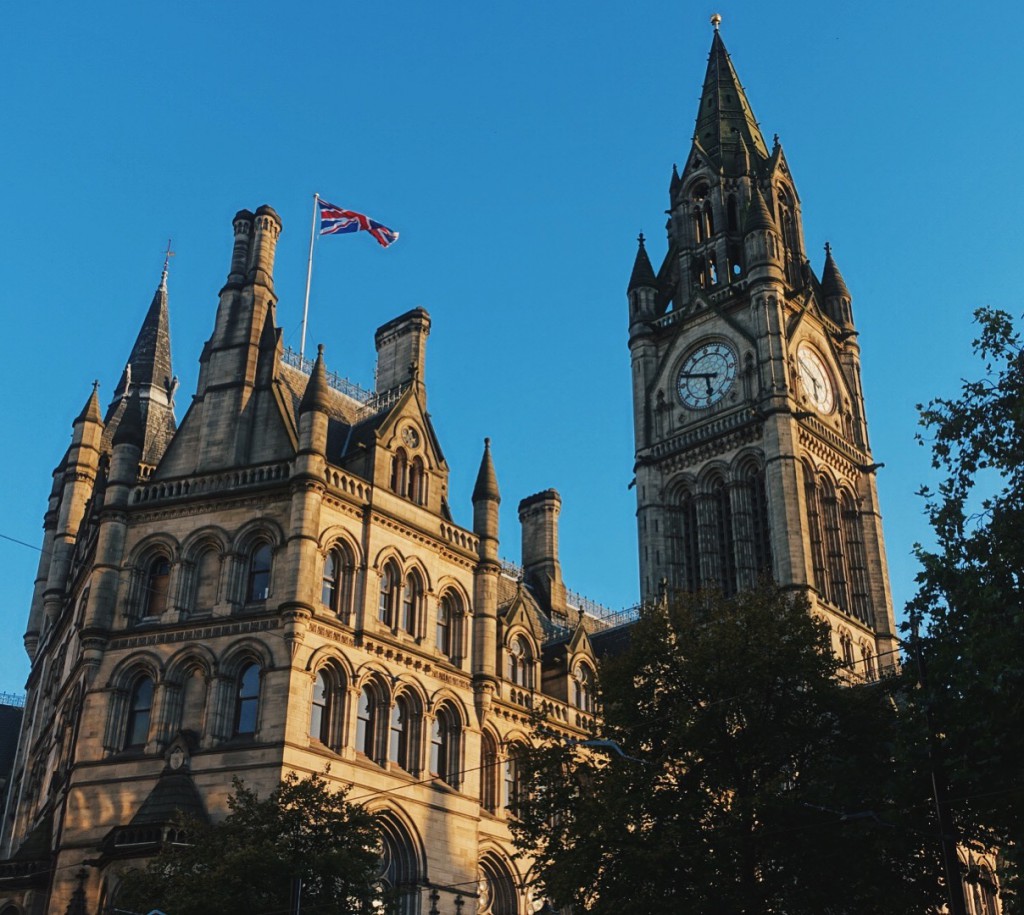 Next thing on my list was to visit the John Rylands Library. I’d heard a lot about it so had to pay a visit myself. 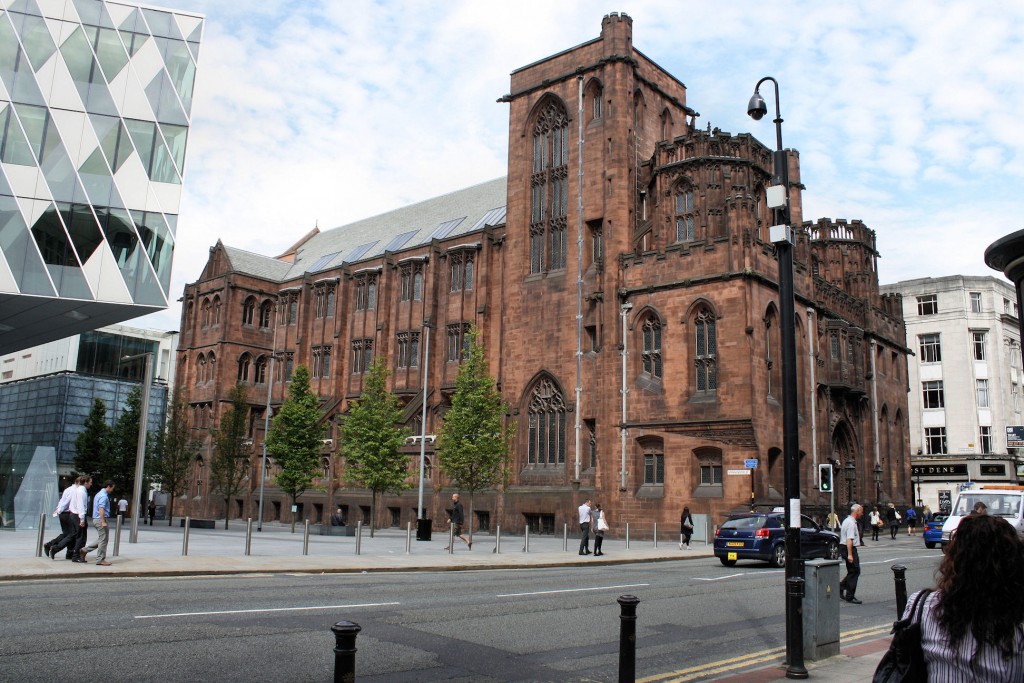 John Rylands was apparently Manchester’s first self-made millionaire and was a successful businessman in the 19th century. This library was built as part of a memorial dedicated to John Rylands by his wife Enriqueta in hopes to open it to the public and enrich the city’s architecture. It officially opened in 1900 and housed 70,000 books and 100 manuscripts, but that was just the beginning… 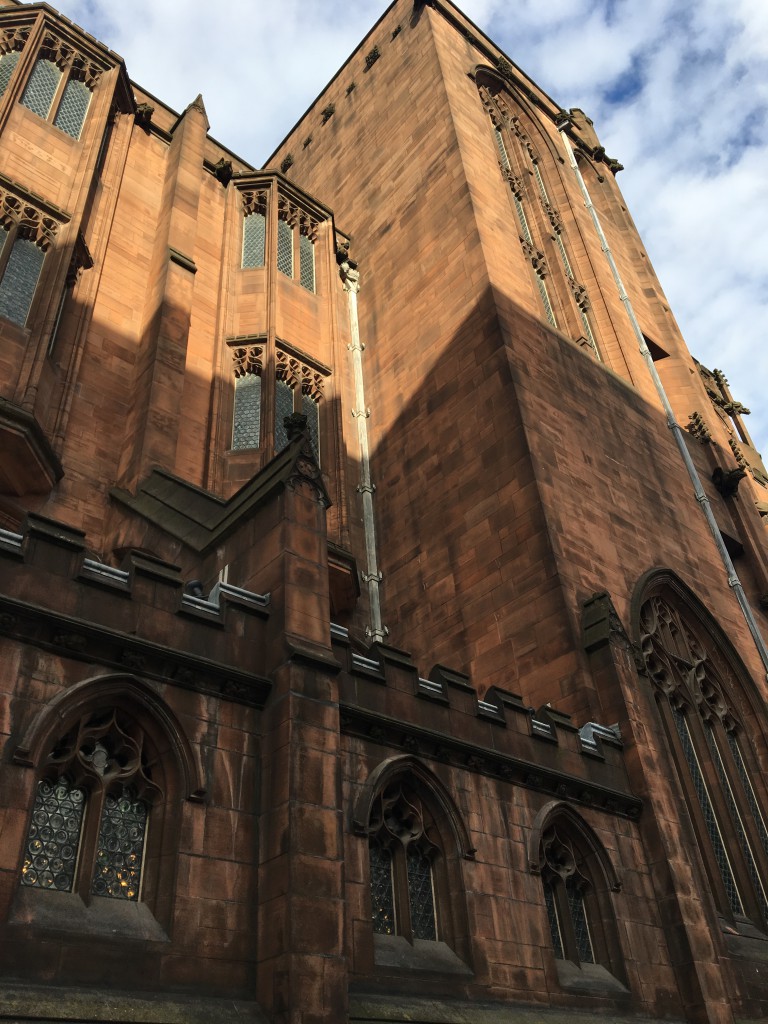 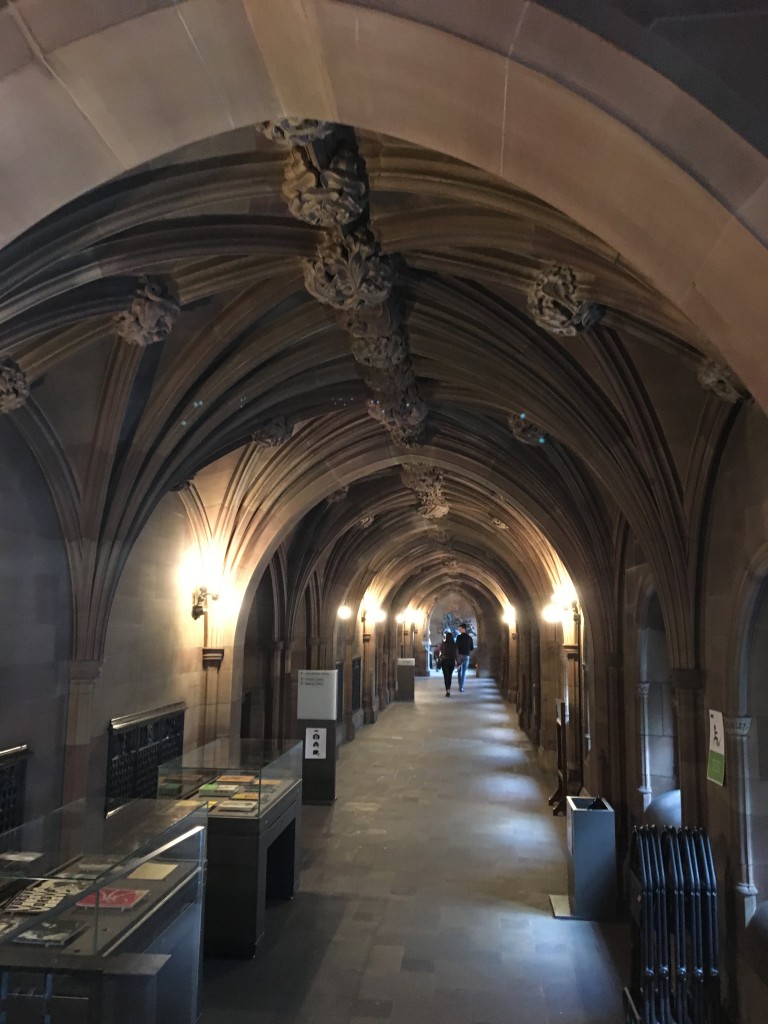 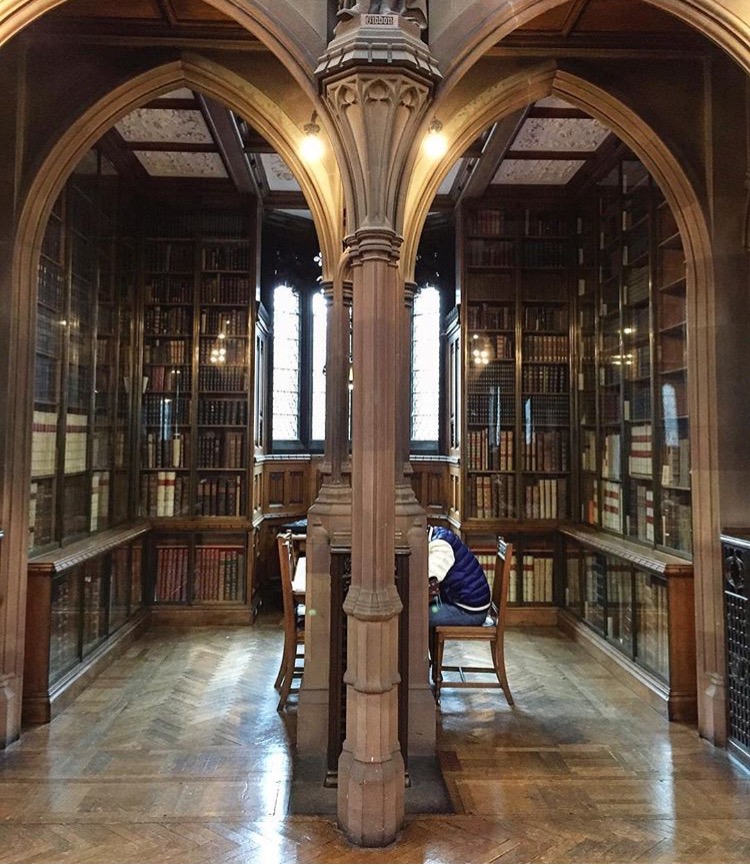 Enrequita Rylands paid for the Crawford  collection of more than 6,000 manuscripts in fifty different languages assembled by the 25th and 26th Earls of Crawford. The collection has been referred to as “a bibliographical microcosm of all liberal arts”. In 1921, Henry Guppy, a librarian from 1900 invited local families to deposit their archives for safe keeping as during that time there were no county record offices in Lancashire or Cheshire and the Library therefore became one of first institutions to collect historical family records. The library since expanded and merged with Manchester university in 1972, as which it currently still stands. 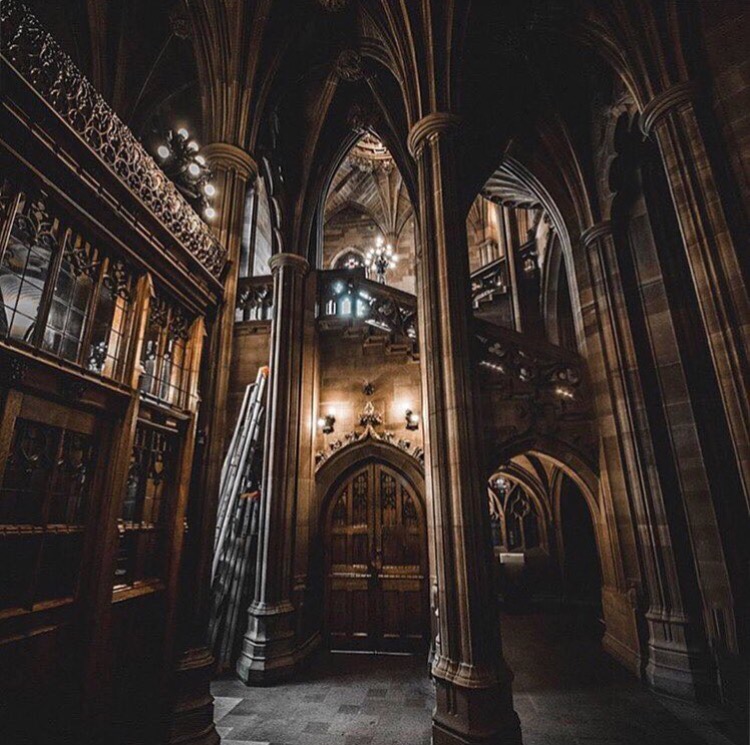 Isn’t the architecture just amazingly incredible? It literally made me feel like I was in hogwarts… 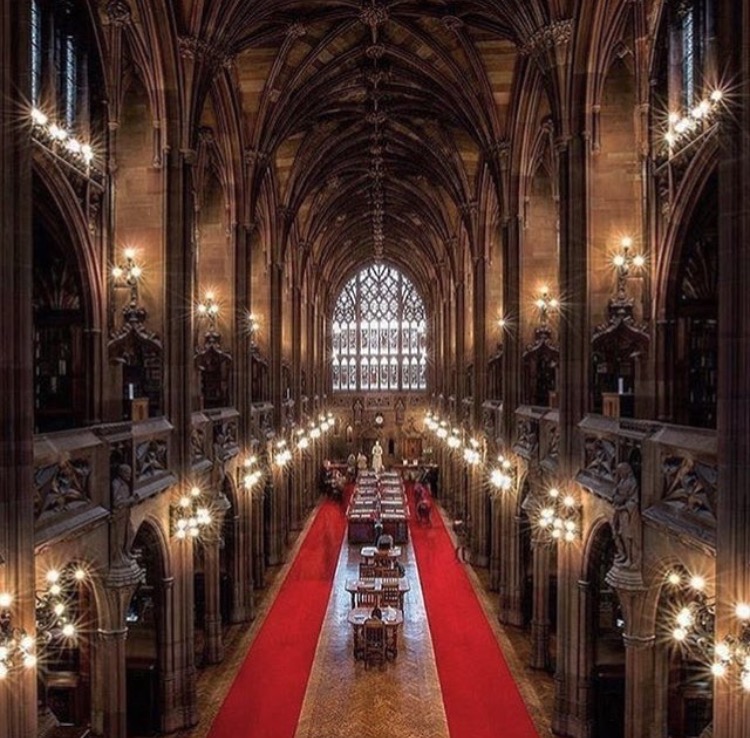 Room of requirement through these double doors do we think….? 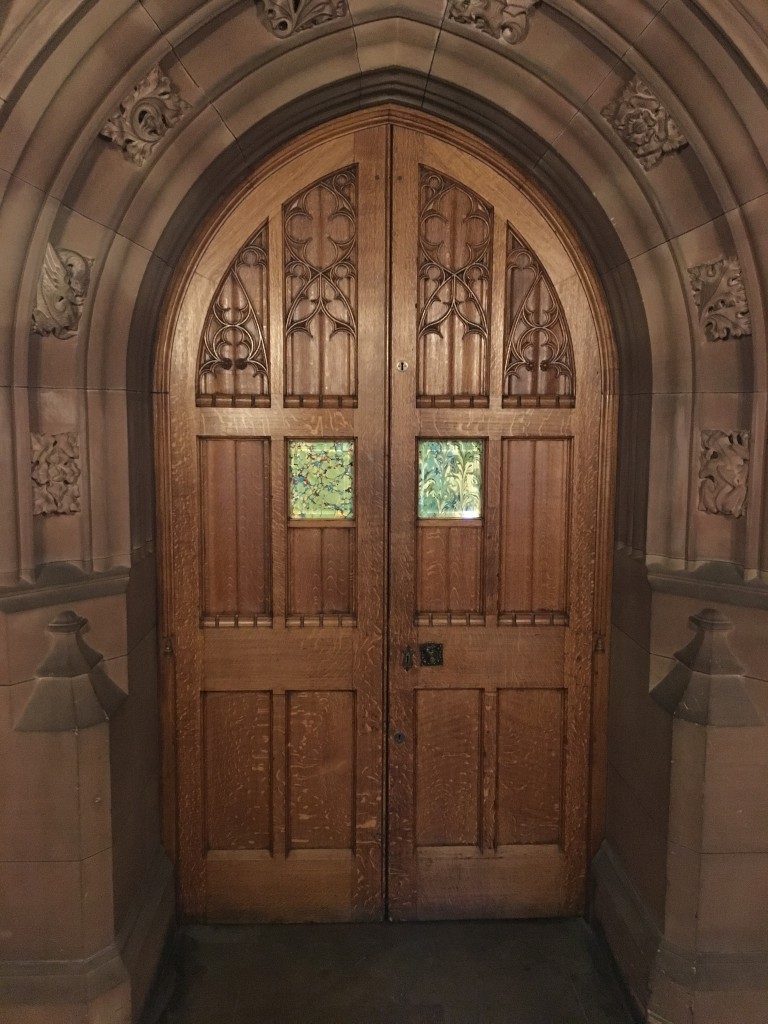 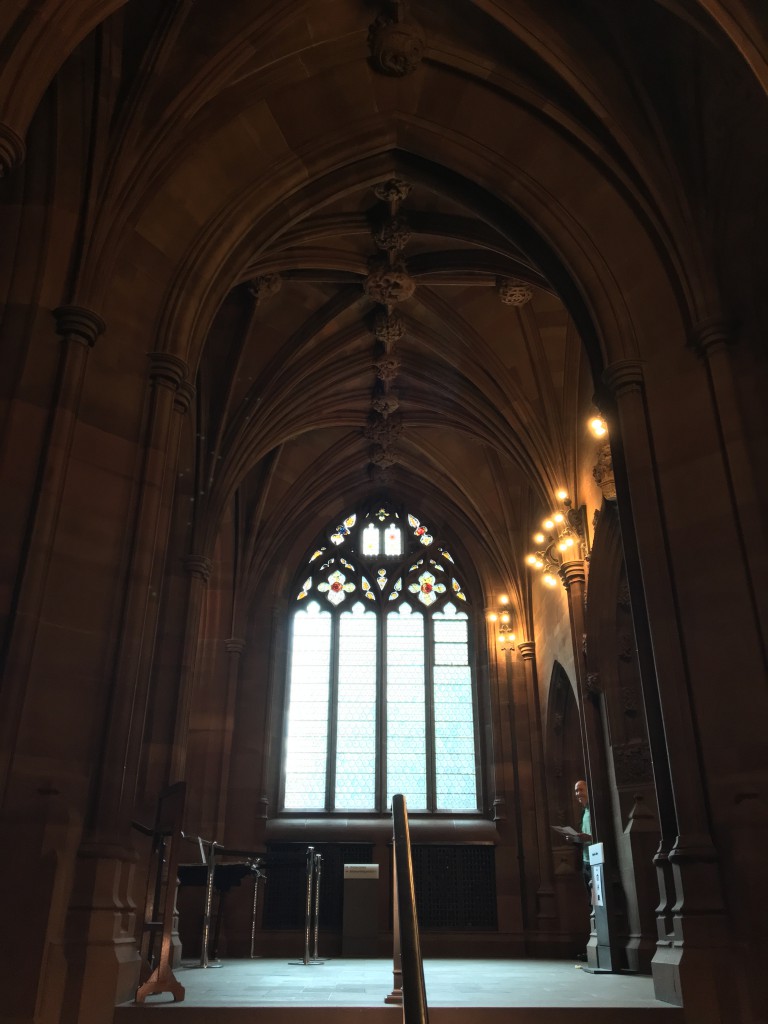 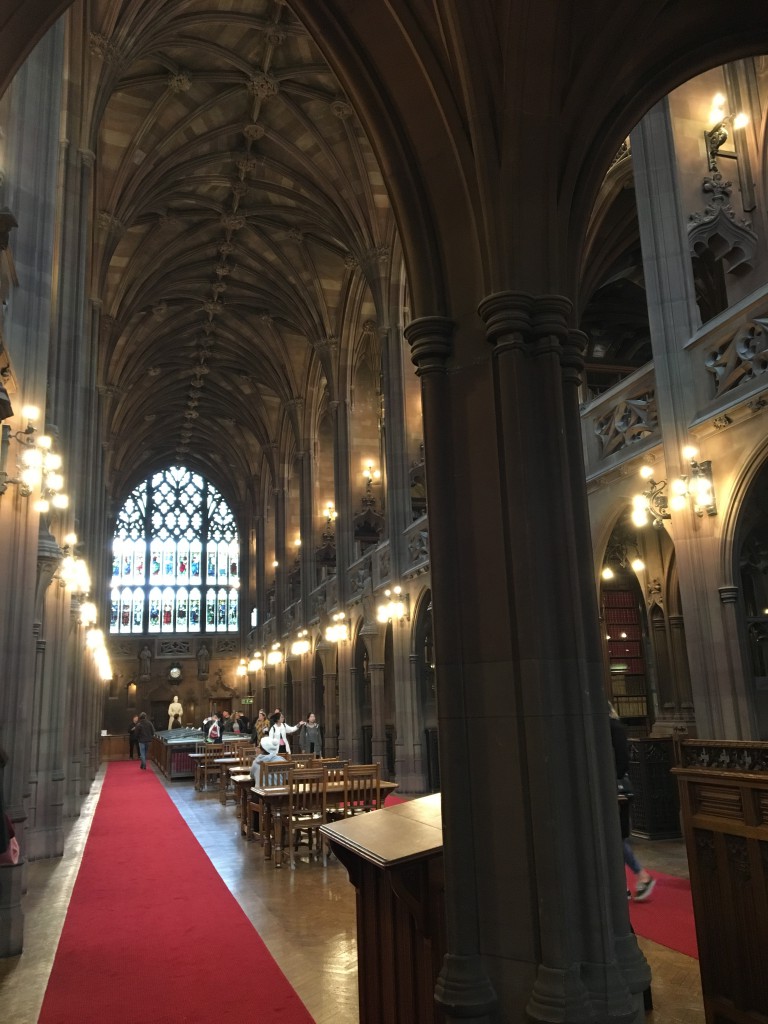 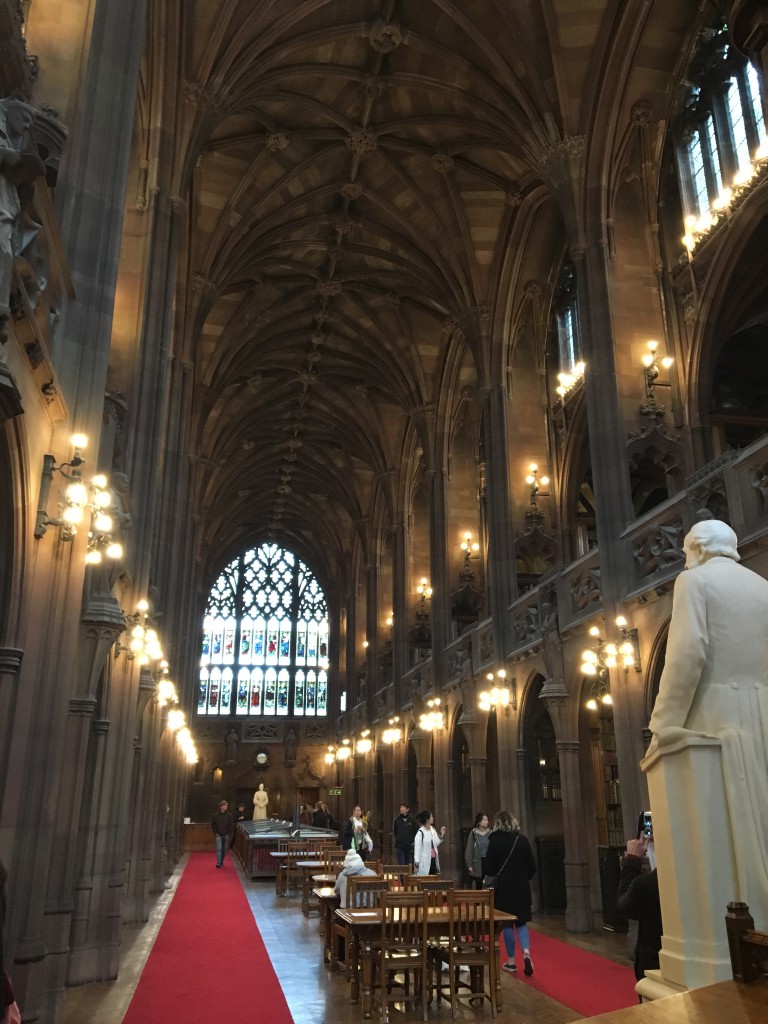 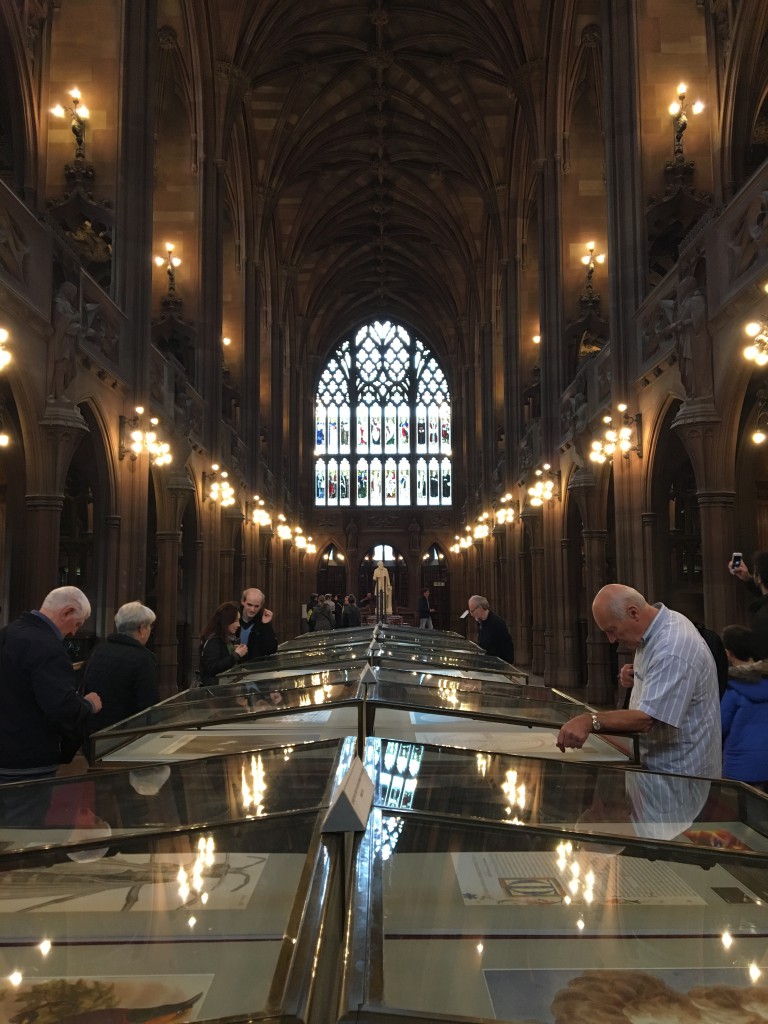 That’s unfortunately all I had time for in the end as most of my trip was business related, but now I’ve been I definitely want to go back. And when I do I want to do the following things:

1) The Oasis Exhibition ‘Chasing the Sun’ at Old Granda Studios to look at rare and iconic photographs, artifacts and memorabilia from the early years of the band!

4) Drinks in The Fitzgerald

5) The IWM North for its vista views

6) The Museum of Science and Industry (after all, did you know Manchester is where the very first computer was invented!?)

Have you ever been to Manchester – is there anywhere else you’d recommend me or anyone else going if they take a trip? Comment below and be sure to let me know!